Anthropocene and Climate Change at Glance

As a consequence of human activities the global climate is changing at a rate that is unprecedented in at least the past few centuries, leading to the suggestion that this era should be referred to as the “Anthropocene”. While climate hind-casting and pollen histories in sediments are advancing our understanding of how past ecological ecosystems responded to previous climate changes, forecasting power really depends on how accurately we can predict ecosystem functions that are likely to change in the future.

Despite substantial recent advances in our ability to predict climate change, considerable uncertainty remains – especially in our understanding of how ecosystem functioning could be influenced by climate change and how this may feed back to affect greenhouse-gas fluxes. The decomposition of organic matter in leaf litter and soils accounts for a global flux that is approximately 7 times as large as global anthropogenic emissions. Understanding how climate change will affect carbon held in dead organic matter pools – including leaf litter, woody debris and soil organic carbon – is essential.

Decomposition and Why it Matters 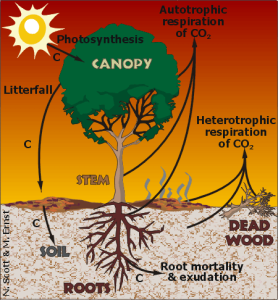 Carbon cycle summary. Note this focuses only in forested or terrestrial ecosystem.

Decomposition is defined as the “physical, chemical and biological mechanisms that transform organic matter into increasingly stable forms” in plant detritus. However, only small part of carbon goes through this process. Most of dead organic matter becomes CO2. Decomposition of organic matter is important because of its link to the global carbon cycle. Simply stated, the carbon cycle consists of carbon inputs via photosynthesis and outputs via respiration. However, while photosynthesis is relatively well studied and understood, respiration – including that of living organisms (autotrophy) and of dead ones (heterotrophy) – is understudied. As a consequence, our understanding of decomposition is much less sophisticated. A substantial amount of greenhouse-gas (CO2, CH4, N2O) production occurs either directly or indirectly from organic matter decomposition, including woody debris. Similar amounts of CO2 efflux exist between fluxes from woody debris decomposition (8.6 Pg yr-1) and fossil fuel burning (9.6 Pg yr-1). So we desperately need a reliable technique to quantify CO2 from decomposition. END_OF_DOCUMENT_TOKEN_TO_BE_REPLACED