One of my main areas of study is Periphyton developed in microcosms. For those of you who don’t know, Periphyton is a green biofilm that you may notice in some (not very clean) swimming pools and is composed mainly of algae, bacteria, fungi, meiofauna and detritus. I started studying Periphyton because my Masters thesis involved developing a model in freshwater systems and after that I wanted to look into their spatial distribution. 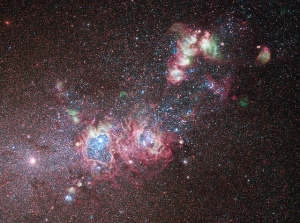 I wanted to find an opportunity to connect my study system with two of my passions: space travel (I used to watch Star Trek and also I thoroughly enjoyed Space: The Final Frontier for Ecological Theory by Peter Kareiva) and tropical rainforests (which I developed a fondness for while watching Tarzan). I thought I could use Periphyton as a model system to test ecological theory, with a complexity similar to tropical forest as suggested by Lowe [1].

The study of the spatial structure of Periphyton was not as easy as space travel in Star Trek (for one thing they have a warp drive and I don’t!). I wanted to compare spatial models and data, but the methods that were available weren’t very well-suited to what I wanted to do, so I was not sure of how to begin. In the end, I decided to launch my first microcosms experiment and in the first photos I took of Periphyton’s spatial structure I saw they were like clouds, algae clouds. END_OF_DOCUMENT_TOKEN_TO_BE_REPLACED