Below is a press release about the Methods in Ecology and Evolution article ‘Empowering conservation practice with efficient and economical genotyping from poor quality samples‘ taken from the Stanford Woods Institute for the Environment.

The challenges of collecting DNA samples directly from endangered species makes understanding and protecting them harder. A new approach promises cheap, rapid analysis of genetic clues in degraded and left-behind material, such as hair and commercial food products.

The key to solving a mystery is finding the right clues. Wildlife detectives aiming to protect endangered species have long been hobbled by the near impossibility of collecting DNA samples from rare and elusive animals. END_OF_DOCUMENT_TOKEN_TO_BE_REPLACED

The following is a press release about the Methods paper ‘An examination of index-calibration experiments: counting tigers at macroecological scales‘ taken from the University of Oxford News and Events page:

Flaws in a method commonly used in censuses of tigers and other rare wildlife put the accuracy of such surveys in doubt, a new study suggests.

A team of scientists from the 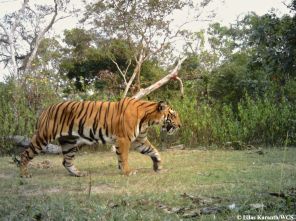 University of Oxford, Indian Statistical Institute, and Wildlife Conservation Society exposes, for the first time, inherent shortcomings in the ‘index-calibration’ method that means it can produce inaccurate results. Amongst recent studies thought to be based on this method is India’s national tiger survey (January 2015) which claimed a surprising but welcome 30 percent rise in tiger numbers in just four years.

The team urges conservation practitioners to guard against these sources of error, which could mislead even the best conservation efforts, and suggests a constructive way forward using alternative methods of counting rare animals that avoid the pitfalls of the index-calibration approach.

A report of the research is published this week in the journal Methods in Ecology and Evolution.