Below is a press release about the Methods paper ‘Development and calibration of a novel sensor to quantify the water content of surface soils and biological soil crusts‘ taken from the Max Planck Institute.

Innovative measuring device enables the water content of biological soil crusts to be measured for the first time.

Biological soil crusts comprising lichens, algae and mosses play an important role in the earth’s ecosystems. They fix carbon dioxide and nitrogen while giving off significant amounts of the greenhouse gas nitrous oxide. Information on soil moisture is of vital importance to investigate their fixation and release processes and to understand them in detail. Previously, no sensor existed that could measure the water content in the top millimeters of the soil with sufficient accuracy. This gap has now been closed by a new development of Bettina Weber and her colleagues at the Max Planck Institute for Chemistry in Mainz, as can be read online in the ‘Early View’ section of the Methods in Ecology and Evolution Wiley Online Library. They have managed to construct an appropriate soil moisture sensor, which delivers reliable data, as well as being cost-effective and flexible to use. 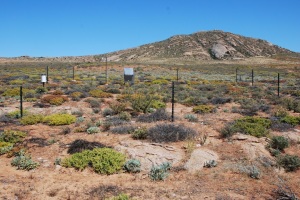 The site, where the soil moisture sensors are installed as a compound of climate stations, is protected from grazing animals by means of a fence. ©Bettina Weber

Biological soil crusts consist of a community of cyanobacteria, lichens, algae and bryophytes, together with fungi, bacteria, and archaea, which grow in the upper three to five millimeters of the soil, forming a hardened layer. They exist in dry regions throughout the world and occupy approximately 20 million square meters, which is almost as large as the surface of South America. All the organisms in biological soil crusts are poikilohydric, which means that they are only active when the soil is sufficiently moist, but survive in an inactive state under dry conditions.

Up to now, the available methods were only moderately suited to at least approximately determine the water content within the top soil level. “The only sensor that can be used in the uppermost layer merely measures whether the organisms are active, but not the water content. All other soil moisture sensors measure the water content in deeper layers, making them totally unsuited for applications in biological soil crusts,” Bettina Weber, group leader in the Multiphase Chemistry Department, describes the problem.

Because the soil moisture in the top five millimeters is essential for the activity, productivity and surface transfer rate of periodically wet organisms, however, Bettina Weber tried to determine this unknown factor by means of an own new development. Together with her research team, she found a method that enabled her to determine the soil moisture by means of its conductivity. The key component of the measuring device is thus a conductivity sensor. 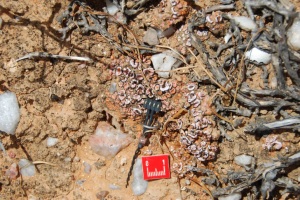 The newly developed soil moisture sensor being used in a lichen-dominated soilcrust in the Succulent Karoo, a semi-desert in South Africa. ©Bettina Weber

The calibration of the sensors posed the biggest challenge: Because the conductivity of the soil is affected not only by its moisture, but also by factors such as its granularity and salt content, the sensors must always be calibrated within the substrate that is being measured. It was only after numerous attempts that the researchers were able to develop a reliable method that enabled them to assign the conductivity values to the corresponding water content values. “As it is really time-consuming to create calibration curves in the laboratory after the field measurements, we have also developed a method to establish a calibration curve that is slightly less accurate but requires fewer field measurements,” states Thomas Berkemeier, doctoral student in the Multiphase Chemistry Department, who developed the mathematical approach for calculating the calibration curves.

As a whole, the new development of the Mainz scientists convinces due to its numerous advantages: Firstly, thanks to its simple structure and robust construction, the sensor can be deployed universally in all kinds of soils around the world. Secondly, the low acquisition costs make it possible to install multiple sensors simultaneously, allowing small-scale patterns and dependencies to be registered in a statistically reliable manner, something that wasn’t possible previously. With simple adjustments, the newly developed soil moisture sensors can be used for measurements over larger soil areas. This makes them potentially useful not only for research projects on biological soil crusts, but also for industrial applications, for instance in the processing of concrete.

The Max Planck scientists have obtained protection for their invention and have registered the moisture sensor as a utility patent. Currently, Bettina Weber is already working on a further development of the sensor, to make it ready for utilization in distributed sensor networks.