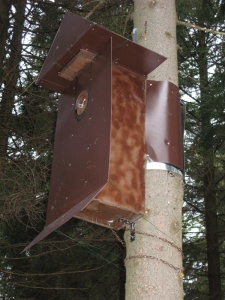 The SNBox in the field

Seeing is better than being told, isn’t it? In recent years, video recording and analysis has become a successful non-invasive method for collecting biological data on many species. At Project Smart Nestbox (a collaborative project between the Czech University of Life Science Prague and the Czech Technical University in Prague) we decided to push these methods forward to allow for the long term surveillance of cavity or box-nesting species. We developed and tested the Smart Nest Box (SNBox) – a system that overcomes some of the usual limitations found in video recording fieldwork: data storage capacity, power source and insufficient light. As it’s National Nest Box Week in the UK, Methods in Ecology and Evolution have asked me to write a blog post about it.

What is the Smart Nest Box?

Components of the smart nest box (SNBox): (a) the control board; (b) the camera with a lighting board; (c) infrared light barrier.

Essentially, SNBox monitors cavity-dwelling animals via efficient collection of high-quality biological video and audio data. It can be applied to many different species, but for our study we created a nest box for Tengmalm’s Owls (Aegolius funereus). This nest was continuously monitored by a camera system operating in a remote location for a week at a time without the need to replace or recharge the battery.

We designed the SNBox as a regular nest box with additional space to house all the required components. It contains two simultaneously running operating systems, a 4 GB memory card, a pair of cameras, an event detector placed in the opening (in this case an IR light barrier), a radio-frequency identification (RFID) reader, auxiliary sensors (a microphone, a thermometer, etc.) and a  battery to power the whole system. Most of the outer box surface was covered with aluminium sheet metal to protect it against pine martens.

We were able to continuously monitor the nest thanks to the excellent power conservation abilities of the SNBox. This was achieved by synchronizing the cameras, light sources, and data loggers to be on (or ‘awake’) during intervals when the animals were expected to be active. In ‘sleep’ mode (i.e. when we did not expect the animals to be active), the cameras, the light barrier and RFID reader were turned off to save battery power. SNBox can be set to the actual sunset/sunrise times, so making sure that we caught the owls’ night-time activities was easy.

Design of the SNBox and its individual parts: (A) nesting area; (B) electronic storage area; (C) battery area; and (D) the wiring area

We designed the software so that the camera aimed at the door of the nest box was activated by the interruption of the IR light barrier (i.e. anything entering or leaving the nest) and recorded a five second video. The camera aimed at the floor started operating right after the door camera and recorded for 30-120 seconds depending on our settings. We were able to reduce the time delay between the owl entering the SNBox opening and triggering the first camera frame to just 16 milliseconds, meaning that minimal video data was lost. This shutter speed was chosen because it is quick enough to snap fast moving owls while ignoring smaller potential triggers like insects.

The event detector helped to record only actions of interest, which meant that we recorded about 1 GB of data each week. We had more than enough memory card capacity, despite the system using two cameras. RFID technology was successfully used for recognition of the bird parent sex during nesting. This chip reader demonstrated its high potential – it is a simple and cheap tool for identification of individuals that regularly visit the same place, in their natural habitat.

What Did We Learn about Tengmalm’s Owl with the SNBox?

We used the SNBoxes to observe eight Tengmalm’s owl nests in the Czech Republic during a five-month period. We observed these nests continually during the incubation, nestling, and fledgling phases: a total of 309 days, resulting in 3382 owl video events.

The amount of time that the SNBox was in ‘awake’ mode varied greatly throughout the breeding season. Based on this, it appears that the length of the nights has an effect on the activity of the owls. The lowest power consumption (i.e. when the owls were least active) was found when the night length was about seven or eight hours and the highest power consumption was in April and August, when the night length was more than 10 hours.

Twelve types of Tengmalm’s owl activities were observed in total, three of which had never been documented.  We confirmed that male Tengmalm’s owls deliver most of the prey to the nest, while females incubate the eggs and brood nestlings. Both male and female parents shifted timing of their activities according to sunset and sunrise. Using the SNBoxes, we found that 98% of all prey items delivered to owl nests are mammals or birds. The technology also allowed us to identify 77% of all prey items to family, subfamily, genus or species level. We could even evaluate the number of prey delivered by the male and the female separately, the proportion of adult birds and nestlings in the owls’ diet and see where the prey was stored inside the nest box. In more detailed study, we could also evaluate sibling competition during the stay in the nest.

Stored prey, eggs and Tengmalm’s Owl hatchlings in the nest

Tengmalm’s Owl fledglings at the nest 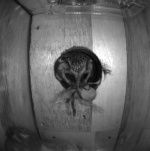 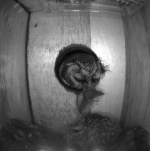 Thanks to the auxiliary sensors, we found that while the mother owl was away, the temperature of the owl clutches decreased by an average of 3.2°C. The temperature within the SNBox dropped further with both the increasing time spent by the female outside the nest and the decreasing outdoor temperature. As a result, female parents spent less time away from the nest when it was colder. This suggests that heat loss from the clutch is a limiting factor for Tengmalm’s owl.

Can I Use the SNBox to Study MY Species?

The SNBox technology can be easily adjusted for research on other species. An easy change would be to adjust the ‘awake’/‘sleep’ time so that you could monitor diurnal animals. The software can be modified to make more significant changes and replacing the individual hardware components would enable the system to monitor many other tasks. As a result, the SNBox could be used for not only for diurnal and nocturnal animals breeding in nest boxes or bigger cavities, but also to research any animal where the action of interest is triggered by actively crossing a specific spot.

The most expensive part of the system for monitoring the Tengmalm’s owl nests was the pair of industrial cameras, which were necessary to collect the required high quality video recordings. Using cheaper cameras could reduce the system cost to two-thirds of the price of our SNBox, which was around €1000 (a little under £800 or just over US$1100). There is scope for further development too, which might bring significant improvements. These could include better audio recording, Wi-Fi connectivity, online video transmission and much more.

We believe the SNBox can be used to study birds, mammals or reptiles using nest boxes to breed, roost, hibernate or store food. It will allow researchers to monitor species’ activities and circadian rhythms, feeding ecology, parental care and sibling competition. By modifying the sensitivity of the event detector you could even monitor insects using cavities and nest boxes. We believe this monitoring system will provide unique insights into the lives of cavity-dwelling animals, as we have shown through the results of our study on Tengmalm’s owl.

We are more than happy to work with anyone interested in using SNBox technology. If there is a demand for more units, we could mediate production too.

To find out more about the SNBox read ‘Smart nest box: a tool and methodology for monitoring of cavity-dwelling animals’ by Zárybnická, Kubizňák, Šindelář and Hlaváč.

1 thought on “The Smart Nest Box: Stepping into the World of Cavity-Dwelling Animals”