We wanted to test whether arboreal mammals were using natural canopy bridges – connections between tree branches over a clearing – to travel over a natural gas pipeline in the Peruvian Amazon. The challenge was figuring out how to monitor branches 100 feet up in the tree tops. In this case, the clearing was a 30-foot-wide pipeline path, and we expected arboreal mammals – like monkeys, squirrels and porcupines – to prefer crossing on the branches rather than on the ground. The ground is an unfamiliar and often dangerous place for an animal that’s spent its life way up in the canopy. 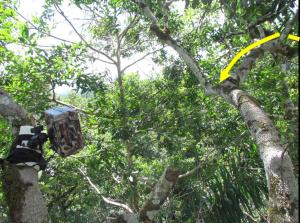 The yellow arrow shows the path captured by the camera trap.

In fact, we wondered if without branches, would arboreal mammals cross at all? How could we find out if animals were using the branches? There were 13 canopy bridges and finding a person to sit and wait all day (and night) under each of them for animals to cross wasn’t an option. With our goal of a year’s worth of monitoring, we had a conundrum. We needed a more efficient way to gather the data and concluded that camera traps – motion sensitive cameras – could be an excellent way to monitor the bridges continuously and remotely.

But, we discovered that no one had ever really used camera traps in the high canopy before. How were we going to get them all the way up there? If we were able to get up to the canopy, how could we make sure they were taking photos of the correct points where animals would potentially cross?

You Can’t Get There from Here…or Can You? 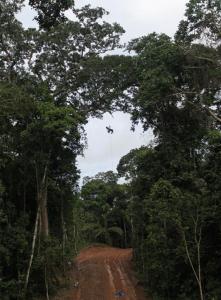 The only feasible solution was to get ourselves up into the canopy with the cameras. So, we went to Panama to learn how to climb tropical trees from tree-climbing expert Joe Maher at the Institute for Tropical Ecology and Conservation. As we had only studied primates and other wildlife (albeit for years) from the ground with binoculars, it was an exciting experience to get up into the canopy.

Unlike the forest floor, which is essentially a flat plane, the canopy is a network of lines and much more complex to move around in. In the canopy, one false move and you find yourself on the ground. Primatologists often see primates fall out of trees, particularly younger individuals that may be distracted during play. Autopsies of deceased individuals often reveal old, healed fractures in limb bones.

(a) The supplies used to mount the camera and (b) a camera installed (with the pipeline in the background).

Once we were in the canopy, we could see where the branches from the bridge trees intertwined and where the cameras needed to “capture” crossing animals. However, camera traps were originally designed to monitor animals on the ground. In the canopy, getting the camera aimed exactly at the right point is much more challenging. We designed a special camera mount, using two universal joints, nylon webbing and PVC tubing. The mount allowed us to aim the camera in almost any direction, including perpendicular to the branch on which it was placed.

Dealing with the Locals

Even after the cameras were in place, our challenges were far from over. As it turns out, the canopy is a harsh place for electronic equipment. When we went to check the cameras, they had all kinds of problems. Some had been invaded by ants or termites, causing the cameras to go haywire and take thousands of photos of nothing. Others were “attacked” by dwarf porcupines, excited to find a nice place to grind down their rodent incisors. We found a few cameras wedged open and flooded with rain water – the photos suggest that while gnawing away, the strong little hind legs of those spiny creatures snapped the latch open. In general, we found the canopy camera batteries died and the memory cards filled more quickly than those of the cameras we placed on the ground.

A Picture of Canopy Life

Despite uncharted territory and unexpected challenges, we recorded thousands of events of bridge use by a wide variety of arboreal mammals – from tiny rodents (including a dwarf porcupine species called Coendou ichillus that we documented 900km outside of its previously known geographic range) to large arboreal anteaters as well as birds and reptiles! In the process, we developed an exciting new technique, taking a highly effective monitoring method from the forest floor to new heights. We hope our approach can be used and modified by others so that we may learn more about the forest canopy, a place with innumerable secrets yet to be revealed.

To learn more about our methods, read
‘Arboreal camera trapping: Taking a proven method to new heights’
and
‘Secrets of canopy animals revealed’ by Andrew Sugden.