Below is a press release about the Methods paper ‘Attributing changes in the distribution of species abundance to weather variables using the example of British breeding birds‘ taken from the University of St Andrews.

The goldcrest is being hit hard by cold winters. ©CJ Hughson

Britain’s smallest bird species, the goldcrest, is being hit hard by cold winters, new analysis methods developed by researchers at the University of St Andrews have revealed.

The data analysis techniques, published today in Methods in Ecology and Evolution, take a longer term view over multiple locations and for a period of several years, compared to previous studies.

They showed that the cold temperatures strongly affected breeding numbers of the goldcrest, while in contrast, the song thrush was not affected by the cold, but benefited from wet and mild summers.

During the study period 1994-2013, the mildest winter was in 2006-07 and the coldest winter in 2009-10. Within these three years, goldcrest populations in Britain decreased by an estimated 27 per cent, according to the new analysis methods.

Researchers developed the new method to help improve understanding of how wildlife may react to changes in climate.  The method is helping reveal how susceptible species may be to, for example, cold winters or wet springs on different locations across Britain, 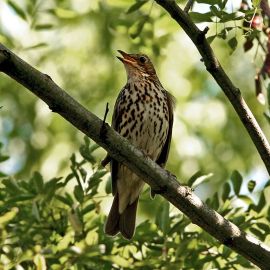 The song thrush was not affected by cold winters. ©Taco Meeuwsen

Dr Cornelia Oedekoven, of Centre for Research into Ecological and Environmental Modelling at the School of Mathematics and Statistics, said: “Given the multi-dimensional nature of climate change, developing tools for incorporating multiple climatic factors in the analyses will ultimately be required to more fully understand the overall impact of climate change on wildlife populations.”

The research relied on the data gathered by thousands of volunteers for the British Breeding Birds Survey organised by the British Trust for Ornithology, and weather day from the Met Office spanning two decades.

Five bird species were looked at: goldcrest, song thrush, linnet, cuckoo and willow warbler, of which the first three are residents, and the other two are summer migrants.  Bird species numbers were related to various factors and three different weather variables: winter temperature, breeding season temperature and breeding season rainfall.

Dr James Pearce-Higgins, Director of Science at the BTO, said: “This study adds to the evidence that warmer temperatures have boosted populations of many resident species, and driven northwards shifts in their distributions, although impacts on habitat specialists and long-distance migrants are less positive.”

This new method provides a starting point for boosting the ability to understand how changes in wildlife distribution and climate change are related. In the future, the researchers hope the method will be further developed to improve our knowledge on the impacts of climate change on wildlife.

The methods were developed in collaboration between the University of St Andrews, Biomathematics and Statistics Scotland, the BTO and Scottish Natural Heritage (SNH) and funded through the Scottish Government’s Centre of expertise ClimateXChange.

To find out more, read the Methods in Ecology and Evolution article ‘Attributing changes in the distribution of species abundance to weather variables using the example of British breeding birds’.