The Struggle is Real: Finding Interesting and Relevant Articles

Where to start? We are awash in data, information, papers, and books. There are hundreds of ecological and environmental journals published regularly around the world; the British Ecological Society alone publishes five journals and is now accepting submissions for a sixth (more information on People and Nature here).

None of us has time even to click on the various articles flagged by alerts, feeds, or keywords, and few even browse tables of contents (which are becoming irrelevant as we move to DOIs and immediate-online publication). Increasingly, we rely on our friends, colleagues, students, and mentors to point us towards papers we might find interesting – further evidence, I suppose, of the importance of good networks for knowledge creation and scientific understanding. 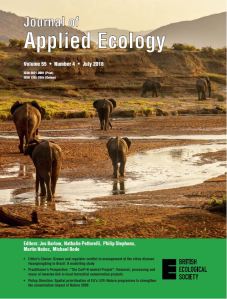 Regular readers of Methods in Ecology and Evolution or this Methods blog may not realise how many methodological papers are published routinely in our BES sister journals. In this inaugural posting of Also of interest…, I highlight three papers recently published in Journal of Applied Ecology that introduce and apply new, model-based methodology to interesting ecological questions. The specific methods are like many seen in the pages of Methods in Ecology and Evolution and suggest general approaches for modelling and studying complex ecological and environmental phenomena.

Where Have the Nightingales Gone?

The authors present two methodological innovations. The first was to use prior knowledge (data from previous samples) to decide which tetrads to sample and when to sample them. This allowed the authors to maximise detection of these rare birds. The second was to assess and propagate uncertainty in population estimates. They did this by estimating birds in sites previously known to have been occupied by nightingales (but now unoccupied) and in sites with suitable habitat but without nightingales. A subset of the latter (“additional”) sites were sampled, and estimates of expected population there were extrapolated using statistical modelling that included estimates of detection probability.

The central take-home message from Hewson et al.’s study is that the estimate of nightingale population size is quite sensitive to the sampling and analytical methods used. Detection probability varied from 55-65%, depending on the model used (territory models using either the Huggins Robust Design in RMark or one that included habitat as a covariate; or an abundance model using the N-mixture model implemented in presence). Estimates of population size ranged from 5,000 – 6000 territorial males, with confidence bounds ranging from 4,700 – 6500.

The sobering conclusion is that accurate estimates of population size often require large amounts of data. For less apparent or broadly “interesting” species such data generally are unavailable. But as other research has recently shown, even accurate data on population sizes of charismatic megafauna isn’t enough to stop their seemingly inexorable declines.

The authors began by fitting Bayesian geostatistical models of local-scale abundance of two species of Glossina flies as a function of habitat (woodlands to grasslands) in the Serengeti National Park. These geostatistical models are similar to the habitat data models fit by Hewson et al. to the UK nightingales, but fully account for spatial autocorrelation in the data. The key innovation in Lord et al.’s paper was to predict areas of high Glossina abundance outside the spatial extent of the initial sampling. They then confirmed the predictive ability with further field sampling.

Spatial ecology is also central to the third paper highlighted here. Erös et al. developed a methodological framework and optimisation model for linking biodiversity and ecosystem services in river networks and identifying riverscapes that deserve priority for conservation efforts. Their framework brings together:

The resulting model is spatially explicit and yields some counter-intuitive predictions. For example, it recommends directing limited resources for conservation towards a relatively small river network in a well-developed region of Hungary. Unlike either of the other two papers, though, Erös et al. don’t discuss uncertainty in their model output or  how errors could increase as multiple indicators and data streams are integrated.

These three papers share common methodological themes. All move well beyond simple models and integrate prior or qualitative knowledge with quantitative data in innovative ways. All give us ways to use the known to learn about the unknown and suggest new policies for conservation or management.

All of the papers have different methodological approaches, but they’re united in their complexity—variously including autocorrelation structure, combinations of fixed and random effects, interactions, or mixtures of qualitative and quantitative information (see also the recent Special Feature in Methods in Ecology and Evolution on qualitative methods for eliciting judgements for decision making).

Model complexity can obscure uncertainty, and the three papers I’ve highlighted herein left plenty of room for improvement of their assessments. Nearly a decade ago, Michael Lavine edited a forum of papers in Ecology and Ecological Monographs on Living dangerously with big fancy models. One of the contributors, Subhash Lele, wrote that “inferences are primarily driven by the data or by the assumptions”, an observation still rings true. Models continue to push our inferential envelopes, and their further development is a core component of ecological methodology. But our understanding of ecology advances most when we confront the models with hard-earned data.

You can find out more about the Journal of Applied Ecology on their blog. And you can read more of their articles on the Wiley Online Library.

One thought on “Also of Interest… Journal of Applied Ecology”