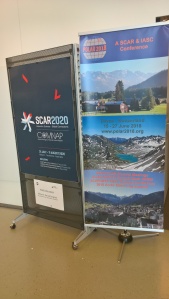 Earlier this summer, I attended a rather unique conference – Polar2018 in Davos, Switzerland. This conference brought together the two major committees that help govern and coordinate Arctic, Alpine and Antarctic research around the globe – the Scientific Committee for Antarctic Research (SCAR) – who also celebrates their 60th Anniversary this year – and the International Arctic Science Committee (IASC).

With nearly 2500 delegates over one week it was impressive how talks and sessions kept to time, posters went up and came down, and coffee (good coffee, served with correctly cooked croissants!) was served. The level of organisation you’d hope to see at all conferences, big or small. The venue for Polar2018 was also home to the G7 world economic forum summits and staff seemed at ease with only having 2500 delegates to deal with…

From day one, there was persistent message throughout the conference. Not only does the rest of the human populated world affect the polar environments, but in response, any change in polar ecosystem and environment functioning (biological and non-biological) has a large knock-on effect on the rest of the world. 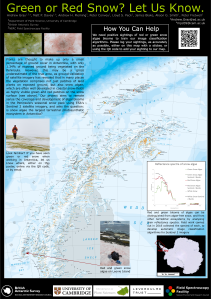 On the biology side of the conference there were topics covering the whole of the tree of life ranging from prokaryotes and micro algae, to insects, plants and animals. They covered how we can carry out observational and experimental science in very remote places and in the lab. On the non-biological side, topics included things like geochemistry, atmospheric and space physics, gravity waves and satellite remote sensing. The great thing about this mix within the talks and posters was that you could see how these areas were fusing to produce even more impactful and meaningful science. Remote sensing to count seals, penguins and, in my case, snow algae (to find out more click my poster on the right).

Improvements in technology, remote drones and solar and wind powered instruments mean that areas previously too dangerous to explore can be explored and studied. We can do so for longer using less energy, which is safer for the researchers. The cost and logistics of the research, to get those few samples should not be ignored and also come with a heavy carbon footprint. Efforts are being made on how to reduce this with things like in situ field analysis, lighter kit, and more collaborations to avoid repeating work.

A good part of my current research is on snow algae (If on the off-chance you have seen snow algae in Antarctica, please have a look at our poster and contact me) . We’re aiming to find out whether these terrestrial blooms are the dominant photosynthetic organisms in Antarctica. Our project relies on a large number of techniques and skills: field work, molecular biology, taxonomy, microscopy, genomics, metabolomics, photosynthesis, spectroradiometry, satellite remote sensing data and modelling. You can see how to answer such a question requires a range of people and skills! Having worked with so many different methods, it was great to see them brought together under one roof for Polar2018.

Everyone Included, All Had Equal Standing 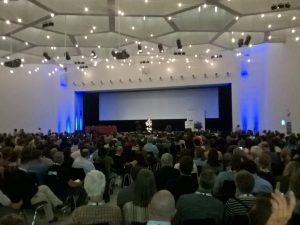 There was a welcoming and supportive atmosphere throughout Polar2018.

The range of talks had an excellent balance of PhD, postdoc, early- mid- and late-career. Everyone seemed welcome and questions were supportive rather than overtly critical. There were also large sessions on science outreach, policy and education. Often these sorts of sessions are aimed at undergraduate and graduate level, but in this case, they talked about outreach to children and the wider public.

In line with this, the BBC had a fantastic session to promote and scope ideas for their next flagship series on the “Cryosphere”. This will follow on from their hugely successful Blue Planet and Frozen Planet series. They pointed out the importance of TV for outreach – it shouldn’t be forgotten in the world of social media. Good scientific documentaries, correctly done in collaboration with scientists, can actually influence politics and legislation. The most prominent point is how Blue Planet influenced the government and industry response to single use plastics.

The importance of including Arctic indigenous peoples in the scientific studies and meetings in their regions was also highlighted. Another area that was touched on in the poster session was the physical and mental health of researchers working in such remote areas. This is an important area, but one we often overlook.

Debates on the Future of the Cryosphere 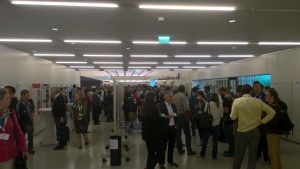 The conference was incredibly well organised, but you’d expect that from a venue that hosts world economic forums.

There was a feeling of “doom and gloom” with much of the modelling showing that unless we act now then large scale climate alterations and environmental damage and change will be irreversible. Some panel members made the point that as a community we should remain optimistic and positive that the damage can be lessened – perhaps to avoid the “it’s too late, why bother changing our behaviour and business models” attitude. 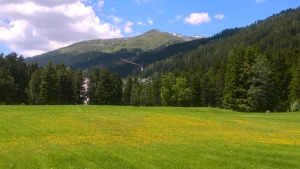 Davos, Switzerland was a beautiful location for Polar2018.

Politically, the case study of the Antarctic Treaty – having been strong for decades and (like SCAR) celebrating its 60 anniversary – is a testament to how countries can and do work together peacefully for a common good. Collectively, we understand that this one continent is “owned” by everyone, and this ownership means that we’re all responsible for it. With the societies pressing these points to their own member countries and politicians, I’m cautiously optimistic that we are in good hands and the “worst case scenario” will not happen.