Understanding animal movement and population size is a challenge for researchers studying any megafauna species. Sea turtles though, add a whole additional level of complexity. These wide-ranging, swift, charismatic animals spend much of their time underwater and in remote places. When trying to track down and count turtles, this obstacle to understanding population size becomes a full-on barricade.

Censusing these animals doesn’t just satisfy our scientific curiosity. It’s critical for understanding the consequences of unsound fishing practices, the benefits of conservation policy, and overall trends in population health for sea turtles, of which, six out of seven species range from vulnerable to critically endangered.

Can we Throw Drones at it?

The eBee fixed wing drone used for our surveys.

Given the importance of understanding sea turtle population sizes, how did we overcome these obstacles to censusing sea turtles? Well, we chose to fly over them.

Recent advances in consumer electronics, battery capacity, and sensor technology have led to extremely capable drone platforms that are affordable for a broad range of research and conservation problems in marine science. Members of our team from the Duke University Marine Lab and the University of North Carolina Department of Biology travelled to Ostional, on the western coast of Costa Rica, to conduct drone surveys of a mass nesting event of olive ridley sea turtles. We wanted to assess the ability of drones to detect turtles while at sea and better understand population densities in nearshore water during mass nesting events.

These surveys can be extremely effective for monitoring megafauna populations on land or at sea. But despite some clear advantages over occupied aerial surveys and boat based assessments, there are some downsides. Drones capture a massive amount of imagery, which can be challenging and exhausting to systematically review.

Can a Machine Count Turtles for Us? 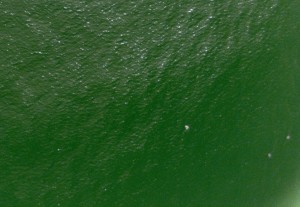 An example of the images produced from our drone surveys with numerous turtles visible.

Being precise and never getting exhausted are exactly where computers outperform humans. So, our question in a recent paper was: can we offload this detection and enumeration problem to a machine? More specifically, our goal was to see if we could leverage recent improvements in neural networks  – machine learning models that learn to perform a task after being shown many examples – to automatically and accurately detect turtles across millions of image tiles. (For those who have not had much experience with them, there’s a great video overview of neural networks here.)

The neural network was able to reach near human accuracy with only around a thousand examples of turtles. This is far more than a human needs to learn what a turtle looks like, but remember this model never complains about looking at images all day. Our model is fully open-source and has benefited greatly from the generally open nature of the machine learning community.

Publicly accessible data (you can find ours here) is also accelerating research. If other sea turtle researchers share their aerial imagery, we could create a generalised model able to detect sea turtles across a broad range of conditions. Hopefully this would also be freely available for research and conservation.

The Future of Sea Turtle Surveys

Map of the study site at Ostional, Costa Rica with an overview of drone flight paths.

Drone surveys have shown great promise, but there’s still a need for improvement in our understanding of behavioural habits. Having more information about things like dive time and foraging strategies, would help us to estimate what percentage of a population is visible from the surface at any given point. This would lead to improved overall estimates of population size.

As drones increase in endurance and accessibility (with some < $10,000 platforms able to fly for over 4 hours with nearly 5 kg of payload like the Albatross) our ability to monitor the pulse of life in the ocean will improve. Fortunately, machine learning is improving fast enough to prevent the analysis of this data itself from being a bottleneck in our increased understanding of ocean health.

To find out more, read our article ‘A convolutional neural network for detecting sea turtles in drone imagery’.