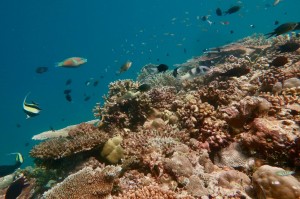 There are an estimated 830,000 species on coral reefs worldwide. At some stage in their lives, nearly all of these species are consumed as prey items. In this super diverse buffet of fishes, corals, crabs, worms, and other critters, the number of possible interactions between predators and prey is nearly inexhaustible.

The extreme diversity of coral reefs has fascinated naturalists for centuries. Pinpointing predator-prey dynamics is essential to fully understand coral reef ecosystem dynamics, and visual analysis of gut contents has been a staple technique of coral reef ecologists. While the joy of spending copious hours looking through a microscope at half-digested marine mush is undeniable, this type of visual inspection has limitations. Even so, visual gut content analysis (along with stable isotope analysis and behavioural observations) has showcased a highly complex dietary network.

To digest this extreme complexity and surmount the hurdle of dietary unknowns, researchers frequently lump fishes into broad trophic categories, such as ‘mobile herbivores’. Broad generalisations are pragmatic and may be help us detect broad ecological trends, but they oversimplify species’ actual dietary preferences. As coral reefs are changing due to anthropogenic disturbances, it’s critical to thoroughly examine how well trophic groupings capture dietary linkages among reef organisms.

The Power of DNA Metabarcoding

In ‘Reconstructing hyperdiverse food webs: Gut content metabarcoding as a tool to disentangle trophic interactions on coral reefs’, we show that DNA metabarcoding is an excellent way to examine trophic interactions across complex communities. DNA metabarcoding is the mass amplification of DNA barcodes from samples containing a multitude of eukaryotes, which has become an increasingly popular technique in ecology. Yet, it has primarily been used to detect dietary differences across a small number of closely related species. We show that DNA metabarcoding represents a powerful avenue to disentangle highly diverse food webs such as coral reefs. 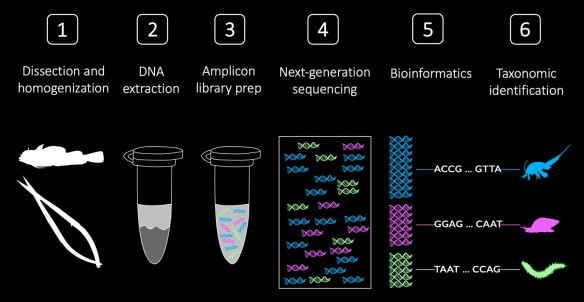 The effectiveness of DNA metabarcoding is often limited by the availability of genetic inventories that enable us to put taxonomic identifications on DNA sequences. Our study was performed on coral reefs around Mo’orea, French Polynesia, which provided us with access to indispensable taxonomic resources. Thanks to the existence of the Mo’orea BIOCODE project, a massive effort to collect and sequence barcodes for all organisms in the region, we were able to reliably conduct fish gut content metabarcoding. 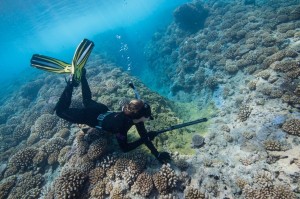 We also found highly distinct ingestion patterns among the fish species – the majority of prey items were specific to a particular fish species. This high prevalence of dietary specificity tells us that there’s substantial dietary partitioning even among some closely related species. That means that gut content metabarcoding could help us to redefine precise dietary functional traits. 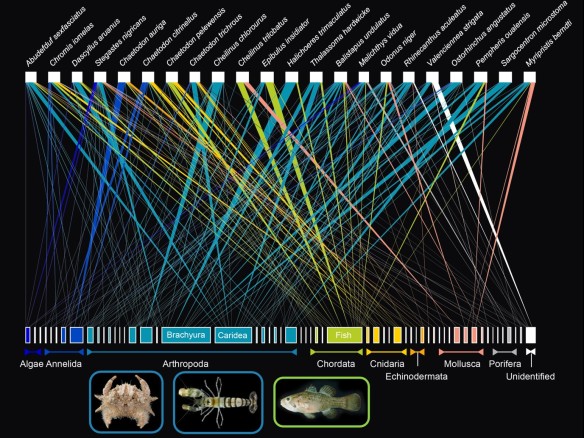 Trophic network of fishes and their prey items ©Jordan Casey

Caveats and Value of Metabarcoding for the Future 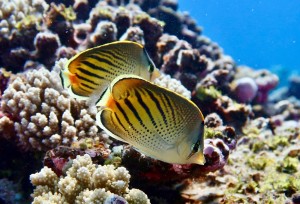 The sunset butterflyfish: one of the study species whose diet we studied with DNA metabarcoding ©Jordan Casey

Overall, our findings suggest that metabarcoding is an invaluable emerging technique for food web reconstruction. Across just 22 fish species, we were able to define over 4000 prey items – often to the genus or species level with a high level of confidence. This would have been impossible to achieve without a molecular toolbox and demonstrates the high potential of fish gut content metabarcoding to trace trophic interactions and permit large-scale food web reconstruction.