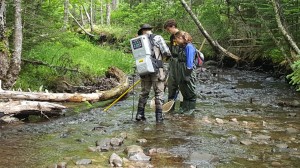 Knowing how many individuals there are in a population is a fundamental objective in ecology and conservation biology. But estimating abundance is often extremely difficult. It’s particularly difficult in the management of exploited marine, anadromous and freshwater populations. In marine fisheries, abundance estimation traditionally relies on demographic models, costly and time consuming mark recapture (MR) approaches if they are feasible at all, and the relationship between fishery catches and effort (catch per unit effort or CPUE). CPUEs can be subject to bias and uncertainty. This is why they tend to be considered relatively unreliable and contentious.

There is an alternative method though. It’s known as “Close-Kin Mark-Recapture” (CKMR), and is grounded in genomics and was first proposed by Skaug in 2001. The method is based on the principle that an individual’s genotype can be considered a “recapture” of the genotypes of each of its parents. Assuming the sampling of offspring and parents is independent of each other, the number of Parent-Offspring pairs (POP) genetically identified in a large collection of both groups can be used to estimate abundance. 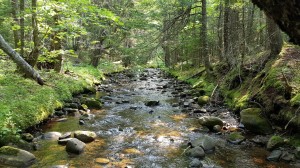 In its simplest form we can express this as: census size (Nc) =  In  this case, Nj and Na are the number of juveniles and adults genotyped at a number of markers and POP is the number of parent-offspring pairs identified. The 2 in the numerator reflects the fact that each individual has two parents (otherwise the formula is analogous to a Lincoln-Petersen standard mark-recapture abundance estimate).

By avoiding the need for CPUE data, CKMR has the potential to change the way marine populations are monitored. The method was recently applied to estimate population abundance in southern blue fin tuna  and white sharks. The uncertainty in existing abundance estimates with either of these species makes validation of CKMR tough though.

In ‘Validation of close-kin mark-recapture (CKMR) methods for estimating population abundance’, we describe and validate the method for small populations (<10,000 individuals) using brook trout as a model. We used a set of seven independent brook trout (Salvelinus fontinalis) populations to do this work. For each population, we compared estimates of census population size based on standard mark recapture (obtained by electrofishing stretches of streambed twice, with fin-clipping for DNA analysis on the first pass, and counting the number of fin-clipped (tagged) fish on the second pass), with those obtained with the close kin mark recapture method. We sampled the populations non-lethally every year between 2014 and 2018 and classified individuals into age classes and assessed them for polymorphism at 33 microsatellite DNA loci. Our population abundance estimates based on CKMR were obtained assuming that although recruitment varies between years, the sampling was still representative of age structure.

We showed that CKMR abundance estimates under these assumptions were statistically indistinguishable from those obtained by standard MR.  In our article, we discuss the sampling requirements and the need for life history information including age at maturity, age-specific fecundity and population and age-specific mortality rates. We also explain the consequences of errors or biases in these estimates.

The study shows the CKMR approach as a method for estimating abundance. Two major assumptions are crucial though:

For age structured populations where fecundity and mortality are a function of age it is also important to have some understanding of this function. These assumptions shouldn’t be a problem for most studies using CKMR though.

To find out more about CKMR, read our Methods in Ecology and Evolution article ‘Validation of close‐kin mark‐recapture (CKMR) methods for estimating population abundance‘