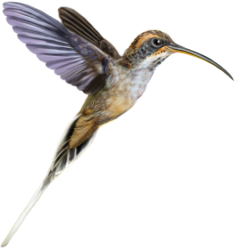 Minimising the effects the ongoing Anthropocene mass extinction has become one of the main challenges of our era. The data suggest that the current rate of species loss is 100–1,000 greater than the background rates seen in the geological record. “But does it really matter if species are lost?” This question has permeated social and political debates. It’s usually used to demean conservation efforts. But it has also intrigued conservation scientists.

We know that species don’t occur alone in their environment. They’re entangled by their interactions, forming complex networks. In these networks the loss of one species may result in the loss of other species that depend on it. This process is known as co-extinction. Estimates of the magnitude of past and future extinction rates have often failed to account for the interdependence among species and the consequences of primary species loss on other species though. 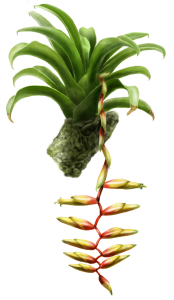 With the rapid rise of network ecology, conservation scientists have started to borrow analytical tools from complexity science. They’ve used these to develop new analyses aimed at understanding how co-extinctions affect the dynamics and stability of ecological networks. One of these tools is the analysis of network robustness which is an estimation of the tolerance of a network to species loss based on ‘knockout extinction simulations’. The ultimate goal of robustness analysis is to understand co-extinction rates and their impacts on the integrity of a network. This sort of analysis has been widely applied to ecological systems where species are highly dependent on one another, such as host-parasite, seed dispersal, and pollination networks.

So, how do we estimate ecological network robustness? Let’s start by imagining a mutualist network composed of two guilds of interacting species, let’s say pollinators (such as hummingbirds) and the plants they pollinate when visiting to forage on nectar. The basic idea of these simulations is to sequentially remove species from one guild (for example flowering plants) and record the number of remaining species from the other guild (in this example, hummingbirds). Species can be either removed randomly or following some specific sequence, based on ecological knowledge. 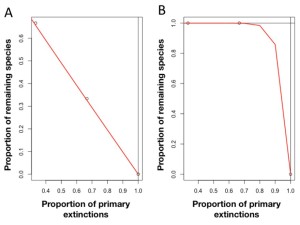 Tolerance curves for two hypothetical scenarios of species loss in a network.

We then plot the Attack Tolerance Curve. This describes the fraction of surviving pollinator species as a function of the eliminated plant species. Robustness is then measured in a straightforward way, as the area under this curve, in the range between 0 and 1. As species are eliminated, the curve decreases towards 1 in the x-axis (as no species in one guild survives because all the species in the other guild have been eliminated). In practice, networks with low robustness will look more like graph A above (to the left), while a highly robust network will look more like graph B.

Despite the importance and frequent use of this simulation framework, it’s quite limited in its biological realism. It ignores the ability of species to find new ‘partners’ within the network. In fact, an assumption of this simulation is that a species must go extinct following the extinction of all partners it was connected to.

But species can sometimes ‘rewire’, meaning that they’re able to rearrange their interactions with co-occurring species. This is a remarkable feature of ecological networks documented in distinct mutualist systems such as seed dispersal and pollination networks. So far, one of the main obstacles in incorporating rewiring into the modeling approach described above is the huge number of mechanisms that might drive species interactions in nature. 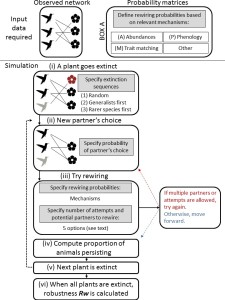 The analytical framework to incorporate species rewiring in the estimation of the robustness of mutualistic networks.

In ‘Including rewiring in the estimation of the robustness of mutualistic networks’, we incorporate the potential of species to replace their lost partners into the estimation of network robustness. In this framework, species are allowed to rewire their interactions after the initial loss of their partners. This is estimated according to probabilities derived from well-known mechanisms driving mutualistic interactions, such as phenological overlap, species abundances, and trait matching.

Our framework (Figure 1 of our paper) also allows the combination of distinct mechanisms. It can even be extended to incorporate other mechanisms depending on what processes are known to be relevant in other ecological systems.

To illustrate the application of this method, we analysed a plant-hummingbird pollination network. For this system, we provide evidence that secondary extinction could be avoided (or at least minimised) by rewiring of interactions to surviving partners.

Species such as Scale-throated Hermit (Phaethornis eurynome) and the bromeliad Vriesea simplex in a community in the Atlantic forest, in Brazil, illustrate how traits may influence rewiring. This bromeliad has a long tubular corolla which constrains access to nectar to only long billed hummingbirds such as the Scale-throated Hermit, which is its only observed pollinator in the studied community. Such morphological traits may define the possibility of this species to rewire to other partners following the loss of their ‘initial’ partners. In this case, the long bill allows this hummingbird to explore nectar at the bottom of multiple plants species making it prone to rewire to other plants, while the bromeliad require other long-billed hummingbirds, making it less likely to rewire and, therefore, more susceptible to the extinction of its partner.

A Scale-throated Hermit (Phaethornis eurynome) pollinating the bromeliad Vriesea simplex in a community in the Atlantic forest, in Brazil. The morphological traits of these two species may inform us whether they could rewire to other partners following the loss of their ‘initial’ partners. ©Jef Vizentin-Bugoni and Pietro K. Maruyama

To the best of our knowledge, this is the first explicit attempt to incorporate drivers of species interactions into network robustness analyses. We still lack a deep understanding of the underlying mechanisms driving rewiring in ecological networks, but we anticipate that our analytical approach will provide ecologists with a more realistic tool to estimate the robustness of interaction networks. Our analytical framework allows ecologists to obtain a descriptor of network robustness, while accounting for interaction rewiring. This can be used to compare network stability over time and across communities. It can also help to identify the most important drivers of network disassembly and their hierarchical importance for robustness.

We hope that our analytical framework can help ecologists attain a better understanding of the underlying mechanisms of the dynamics of ecological networks. If you want to give it a try on your data you can find our code here.

To find out more, read our Open Access Methods in Ecology and Evolution article ‘Including rewiring in the estimation of the robustness of mutualistic networks‘

1 thought on “Reconnecting the Web of Life: Rewiring and Network Robustness”