落红不是无情物，化作春泥更护花。 –龚自珍(清)
“The fallen petals are not as cruel as they seem; they fertilize those in full bloom instead.” – Gong Zizhen (Qing Dynasty)

This picture shows a decomposing log of Douglas fir, Pseudotsuga menziesii (Mirb.) Franco, in Schovenhorst, The Netherlands, which is one of the deadwood incubation sites of the LOGLIFE “tree cemetery” project. 25 angiosperm and gymnosperm species covering a diverse range of functional traits were selected and incubated in the “common garden experiment”. This project was founded in 2012, aiming to disentangle the effects of different species’ wood traits and site-related environmental drivers on decomposition dynamics of wood, and its associated diversity of microbial and invertebrate communities.

Why did we do this study?

Both bark and wood decomposition processes are important for global carbon and nutrient cycles, and these processes may be coordinated because of their shared ontogenetic origin from the cambium between the innermost bark and (sap)wood. Whether tree species with fast (versus slow)-decomposing wood also have fast-decomposing bark matters for predicting the consequences of changing tree species composition for forest carbon turnover.

However, decay rates of large logs in the field are often quantified as loss in tissue density, which can give large underestimations of bark and wood volume depletions. Here, we present new methods for quantifying volumetric loss of bark and wood, and percentage reduction of bark cover during decomposition.

Bark cover loss. For this log, more than 50% of bark cover had been lost.

Thus, we contrast minimum bark mass loss, (i.e. assuming bark coverage was 100% at the second harvest), with maximum bark mass loss, considering losses of bark fragments and assuming all the fragments decomposed immediately. To calculate the percentage of bark loss, we estimated the fraction of bark cover of each log at the second harvest visually. 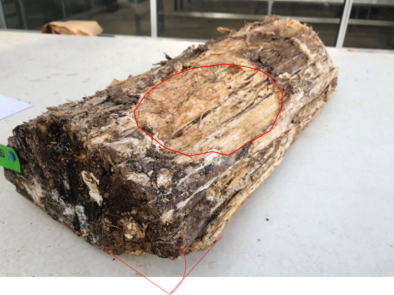 What did we find?

Benefits of our new methods

Compared with previous approaches, our easy-to-use methods can be applied to field studies and common garden experiments for various research purposes. The methods also showed an excellent ability to estimate mass loss of highly-decayed coarse and fine woody debris, and log stems without circular cross section. These methods also allow researchers to quantify the relationship between the traditional decay class system and density, making it possible to broadly understand woody debris decay dynamics across species at regional and global scales.

To find out more about bark and wood mass loss, read our Methods in Ecology and Evolution article “Methodology matters for comparing coarse wood and bark decay rates across tree species”.