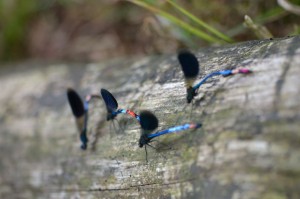 Damselflies marked in the field, which will hopefully be recaptured later. This small insect at our field site had only about 10% recapture probability.

The quantification of survival selection in the field has a long history in evolutionary biology. A considerable milestone in this field was the highly influential publication by Russel Lande and Steve Arnold in the early 1980s.

There are several drawbacks to implementing the Lande-Arnold method as described above, one of which is the inability to account for when marked individuals are not seen on every catching occasion. With very few exceptions, evolutionary ecologists tend to ignore imperfect detection. The general assumption is that the linear-regression based methods described above are so robust that any biases created by imperfect detection can be ignored.

Sophisticated methods have existed for some time that take recapture probability into account and attempt to correct for it when present. These more complex statistical methods have not become widely used among evolutionary ecologists. One reason for this is the fact that estimates produced by software such as MARK do not return output which is directly comparable with classical standardized selection gradients. Also, it is simply harder to implement a complicated mark-recapture model than linear regression with some standardization.

So even though imperfect detection has been recognized as a problem, the severity of this problem has never been quantified using systematic simulations. Until now, no method has been developed to transform estimates produced by mark-recapture models into estimates of selection that can be used within quantitative genetics.

This raises some important questions: Should past studies be reanalyzed? How low does recapture probability have to be before it becomes a problem? In which direction would imperfect detection effect the estimates of selection – if any? How good are the currently available statistical techniques at correcting such errors?

In our paper – The measurement of selection when detection is imperfect: How good are naïve methods? – published in Methods in Ecology and Evolution, we show how robust naïve linear-regression based methods are in relation to less than perfect detection and trait-biased detection rates.

In our article, we provide R scripts and a new R-package EasyMARK to facilitate research in this area. Finally, we provide R code of a method developed by Michael Morrissey which allows estimates produced by mark-recapture models to be transformed into selection gradients.