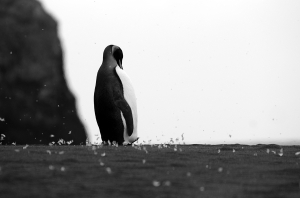 Why Bother Looking at Mitochondrial Function in Ecology and Evolution?

For those of us struggling to remember, mitochondria are the powerhouse of almost all eukaryotic cells (mammalian red blood cells being a notable exception). They convert nutrients into adenosine triphosphate (ATP), a chemical form of energy that fuels most cellular processes. This is what we can call the “bright side” of the mitochondria. However, mitochondria also have a “dark side” since they produce reactive oxygen species (ROS) that can cause damage to cell components. Ultimately ROS compromise cellular functions and accelerate ageing (i.e. a process referred to as oxidative stress).

Importantly, there is a balance between mitochondrial efficiency to produce ATP and ROS production. Being slightly less efficient at producing ATP might be advantageous in some cases because it means reducing ROS production. At this stage, you might be thinking that we’re really far from our penguins. Indeed research on mitochondria has almost exclusively been conducted in the lab with so-called ‘model organisms’. Stick with us though – we’ll get to the penguins soon.

We can see a striking example of this in the eastern yellow robin (Eopsaltria australis), a small passerine bird from Australia being extensively studied by Prof. Paul Sunnucks and collaborators. In this species, there are two different mitochondrial lineages. There is very little geographic mitochondrial admixture, despite a 1500 km long contact zone and the presence of nuclear gene flow . Interestingly, the two mitochondrial lineages are found in different environments, one experiencing warmer and more variables climatic conditions than the other. However, we do not yet know the consequences of this mtDNA polymorphism on mitochondrial function per se.

The Need for a Minimally-Invasive Methodology

The study of mitochondrial function (i.e. the ability to use oxygen and nutrients to produce ATP) in ecology and evolution has been limited so far because the available methods tended to be highly invasive. Indeed, the classical approach consists of extracting mitochondria from liver or muscle samples to analyse their function in vitro. Such sampling is lethal in most captive and wild species. As well as the obvious ethical issues this raises, it prevents the subsequent monitoring of individuals that is required in many ecological studies.

But blood sampling is generally accepted as a minimally-invasive procedure and is conducted as a routine procedure in many wild vertebrate species . So, we capitalised on the fact that red blood cells from non-mammalian vertebrates are fully functional cells to develop a minimally-invasive methodology to assess mitochondrial function in bird species (we’re almost at the bit about penguins now).

Before we could develop this methodology though, we had to prove that avian red blood cells possess fully functional mitochondria. We did just that in 2013 using captive zebra finches. Next, we had to show that measuring mitochondrial function was feasible in the field and that mitochondrial function measured from red blood cells was relevant at the organismal scale. The perfect model to conduct such project was the king penguin (Aptenodytes patagonicus), since a French team led by Dr. Damien Roussel has been studying the mitochondrial adaptations of pectoral muscle in this species for several years. Our field site is located in a small sub-Antarctic island (Crozet archipelago) managed by the French Polar Institute, and our field station is ideally located within a 20,000 breeding pairs colony .

In the study recently published in Methods in Ecology and Evolution, we (my co-authors Caroline Romestaing, Quentin Schull, Emilie Lefol, Jean-Patrice Robin, Damien Roussel, Pierre Bize and I) present the methodology we developed to assess mitochondrial function from red blood cells using a high-resolution respirometry system, also known as an oxygraph. We measured the oxygen consumption of the red blood cells with this oxygraph and used a set of targeted mitochondrial inhibitors and activators to measure various parameters of mitochondrial function.

Getting Back to our Penguins (and Other Birds)

In the king penguin, we will also be able to explore the relationships between mitochondrial function and life-history traits, especially in the context of social stress and long-term fasting. We have suggestions from in vitro and laboratory work that stress hormones are key modulators of bioenergetics pathways including mitochondrial function, and that fasting is profoundly re-modelling mitochondrial function. As king penguins have a challenging/stressful social environment and go through long periods of fasting throughout their very particular life cycle they will be the perfect organism to study this. In other species such as the eastern yellow robin, characterising mitochondrial function will provide crucial information on the role of mitochondria as a driver of evolutionary processes ultimately leading to speciation.

Measuring mitochondrial function in a minimally-invasive manner opens a broad range of opportunities to better understand the importance of mitochondria in shaping animal life histories. It can also help to provide useful information on mitochondrial biology. The approach presented in our recent paper in Methods in Ecology and Evolution has been developed in birds so far, but should be applicable in other non-mammalian vertebrates (since their red blood cells also possess functional mitochondria). More broadly, non-mammalian red blood cells will help us to have access to various measurements of cellular functions in a minimally-invasive way, opening new ways of studying biological processes such as ageing.

To find out more, read our Methods in Ecology and Evolution article ‘How to measure mitochondrial function in birds using red blood cells: a case study in the king penguin and perspectives in ecology and evolution’.

One thought on “What Can Penguins Tell Us About Mitochondria? And Vice-Versa!”