Below is a press release about the Methods paper ‘HyRAD-X, a versatile method combining exome capture and RAD sequencing to extract genomic information from ancient DNA‘ taken from Swiss Federal Institute for Forest, Snow and Landscape Research WSL (this press release is also available in French, German and Italian via the links below). 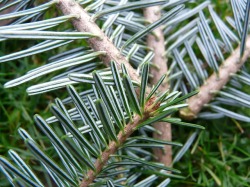 A new technique makes it possible to cost-effectively analyse genetic material from fossil plants and animals. Researchers from the Swiss Federal Institute for Forest, Snow and Landscape Research WSL and the universities of Lausanne and Bern have used this technique to examine the DNA of silver fir remains found in lake sediment in Ticino. They found clues as to how forests reacted to the emergence of agriculture.

The new process utilises the latest advances in DNA technology to isolate ancient DNA (aDNA) from prehistoric plants and animals. The techniques used to date are, however, expensive. “As population geneticists often need several dozens samples to make reliable statements, many research ideas are not currently financially viable,” says Nadir Alvarez, a professor at the University of Lausanne’s Department of Ecology and Evolution.

The research team led by Alvarez and his colleagues Christoph Sperisen (a population geneticist at the WSL), Willy Tinner (a professor of palaeoecology at the University of Bern) and Sarah Schmid (a biologist from the University of Lausanne) has now developed a cost-effective alternative and demonstrated its potential with subfossil silver fir needles found at Origlio lake in Ticino. The team showcased the results in the research journal Methods in Ecology and Evolution.

A Needle in a Haystack

Working with subfossil genetic material is a challenge. “aDNA is often fragmented, chemically damaged and contaminated with the genetic material of bacteria and fungi,” explains Sperisen. “In samples collected in lake sediment, for instance, only every hundredth DNA molecule comes from silver firs.” Extracting aDNA is therefore like looking for a needle in a haystack.

Until now researchers have extracted aDNA by introducing chemically manufactured counterparts of DNA sequences to the sample solution, as DNA consists of two strands with virtually mirror-image sequences of building blocks attached to one another. Tiny metal beads are attached to the manufactured DNA. Once the artificial DNA is bound to the aDNA, the whole structure can be extracted with a magnet.

However, up to 90% of plant and animal DNA (and sometimes even more) consists of sections with no known function, like a cookbook with mostly blank pages. The new technique, hyRAD-X, does not analyse the entire DNA strand but uses specifically the fraction of the genome that is expressed (i.e. those sections containing the instructions for building a protein). The new approach produces a reduced representation of the homologous fragments to these genes, by using an enzyme, an innovation that cuts the cost of an aDNA analysis by tenfold. As every speck of dust contains foreign DNA, this work must be conducted in a clean room, like the one at the WSL’s new national plant protection laboratory.

The researchers used the new technique to investigate the genetic diversity of silver firs before and during the advent of agriculture at lake Origlio. Palaeobotanist Tinner studied the core of the lake sediment and discovered charcoal deposits as well as cereal pollen and invasive weeds, pointing to the first agricultural activities between 5,000 and 7,500 years ago, when people burned forests to clear space for farmland and pastures. This killed off all of Ticino’s heat-loving silver fir stands in the second half of the Holocene; chestnut trees now grow in their place.

The results show that the silver fir stand (and thus its genetic diversity) shrank with the dawn of agriculture and recovered around 6,200 years ago. “DNA comparisons of silver firs of varying ages show that the domestic stand genetically regenerated itself afresh without involving silver firs from other regions,” says Sperisen.

Genetic diversity is key to determining a population’s ability to cope with environmental changes. High genetic diversity increases the chances of adapting to a drier climate, for instance. Understanding how ecosystems previously genetically recovered from human intervention indicates how they could react to global climate change and current changes to the way land is used. As such, researchers now want to use the hyRAD-X technique on other subfossil plant samples to clarify, for example, whether the extinct, heat-loving silver fir stands in Ticino had specific genetic properties that could prove important in warmer climates.

This press release can be found in other languages via the following links: