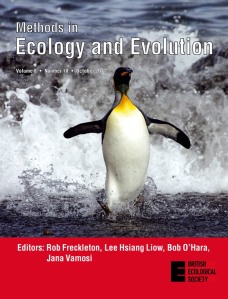 The October issue of Methods is now online!

This double-sized issue contains three Applications articles and two Open Access articles. These five papers are freely available to everyone, no subscription required.

– Phylogenetic Trees: The fields of phylogenetic tree and network inference have advanced independently, with only a few attempts to bridge them. Schliep et al. provide a framework, implemented in R, to transfer information between trees and networks.

– Emon: Studies, surveys and monitoring are often costly, so small investments in preliminary data collection and systematic planning of these activities can help to make best use of resources. To meet recognised needs for accessible tools to plan some aspects of studies, surveys and monitoring, Barry et al. developed the R package emon, which includes routines for study design through power analysis and feature detection.

– Haplostrips: A tool to visualise polymorphisms of a given region of the genome in the form of independently clustered and sorted haplotypes. Haplostrips is a command-line tool written in Python and R, that uses variant call format files as input and generates a heatmap view.

This month’s cover image shows an emblematic bird, the king penguin (Aptenodytes patagonicus), coming out of the water to reproduce on Possession island in the Crozet Archipelago. King penguins have an incredibly demanding life cycle, alternating between long-term fasting periods on land to reproduce or moult and periods of intensive foraging at sea, several hundreds of kilometres from their breeding grounds. The biology and ecology of the king penguin has been studied in Crozet by scientific programs of the French Polar Institute since the early 1960s.