In an age of rapid technological advances, ecologists need to keep abreast of how we can improve or reinvent the way we do things. Remote sensing technology and image analysis have been developing rapidly and have the potential to revolutionise how we count and estimate animal populations.

Using remotely sensed imagery isn’t new in ecology, but recent innovations mean we can use it for more things. Land use change and vegetation mapping are among the areas of ecology where remote sensing has been used extensively for some time. Estimating animal populations with remotely sensed imagery was also demonstrated more than 40 years ago by detecting indirect signs of an animal with some success: think wombat burrows and penguin poop. 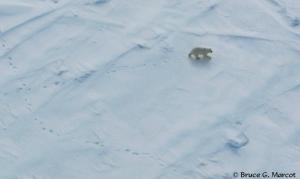 A polar bear from a helicopter

Thanks to improved spatial and spectral resolution (see the text box at the bottom of the post for a definition), accessibility, cost and coverage of remotely sensed data, and software development we have now reached a point where we can detect and count individual animals in imagery. Many of the first studies to demonstrate automated and semi-automated techniques have taken computer algorithms from other disciplines, such as engineering or biomedical sciences, and applied them to automate counting of animals in remotely sensed imagery. It turns out that detecting submarines is not so different to detecting whales! And finding abnormal cells in medical imaging is surprisingly similar to locating polar bears in the arctic!

Why do we Want to Use Remote Sensing to Count Animals?

Polar bears and sheep are a little like chalk and cheese, so there are different reasons why we want to know how many of them there are. Animal abundance information is essential in many fields including endangered species conservation, tracking invasive species spread, agriculture, and wildlife monitoring. But, traditional, ground-based population surveys can be cost-prohibitive, biased, logistically challenging, and time-consuming – particularly in large and hard to access areas. 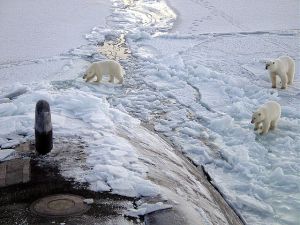 Much of the proof-of-concept work for automated remote sensing methods has focused on wildlife in inaccessible or remote areas, including penguins and polar bears. Perhaps this is because the difficulties and cost of population surveys that are often carried out with aerial or boat surveys have forced researchers to search for alternative methods. Accurate and reliable population estimates of polar bears are notoriously difficult because of their large territories, relatively low densities, difficult to access habitats, and long intervals between surveys. Automated remote sensing methods have the potential to overcome all of these issues, so it’s easy to see why researchers are interested in developing them.

More recently remote sensing and automated detection techniques have been used to estimate populations of domestic livestock species including cattle, horses and sheep. In contrast to polar bears, livestock can have large populations, high densities and are generally wide spread across varied habitats – particularly human modified landscapes. Amazingly, it can be more difficult to monitor their populations than polar bear populations. The heterogenous and wide-ranging environments they can inhabit lead to many false positive and false negative results. Population estimates of these species are often needed by governments for policy and planning, food security, and biosecurity.

How does Remote Sensing Actually Work?

Animals can be counted manually in an image by people searching and counting animals they spot. Alternatively, we can use automated and semi-automated techniques where computer software can detect individual animals, usually by detecting spectral differences in pixels. We’ve developed a lot of the tools for image processing in ecology by adopting technology from other disciplines. There are several methods that have been consistently used for detecting and counting animals and we highlight and discuss them in ‘How do you find the green sheep? A critical review of the use of remotely sensed imagery to detect and count animals’.

Except for a few bird species, most studies which have identified individual animals from remote sensing using automated and semi-automated techniques have been proof-of-concept studies using large bodied animals (>40kg) confined to relatively homogenous environments and/or on small scales of no more than a few square kilometres. All methods show varying results based on imagery type, the study species, number of animals and size of the study area. Location and context also affect results. All of this shows there is no one-size-fits-all solution to estimating animal populations using remote sensing

Image differencing (also referred to as change detection) is one of the most promising techniques and has been demonstrated on a range of species including livestock and polar bears. For image differencing, you need to take two images of the same area with a set delay between them (this can be from several hours to up to a few days). Then, the two pictures are aligned and objects that have moved (detected by changes in the spectral values of pixels) are assumed to be animals. Manually detecting image differences to count polar bears showed higher precision than established aerial surveys, but was labour intensive so it’s not ideal over large areas. For automated change detection methods 87% of known polar bears on Rowley Island, Canada, were detected. For livestock 82% of 158 animals across eight paddocks were correctly identified. But, because of the high number of false positives, (demonstrated in both of these studies) manual review needs to be carried out for this method.

Supervised classification is another popular technique, but in most cases it hasn’t been as successful as other methods for detecting animals. Researchers begin this technique by classifying known animal pixels. The image processing software then uses the mean and variance of the spectral signatures in these pixels to classify other pixels in the image(s) as animal or not animal. This method detected 100% of known polar bears on Rowley Island, which sounds fantastic. But unfortunately, it also identified thousands of non-target objects as polar bears. This was because the spectral signatures of the bears were not sufficiently different from other objects.

Livestock including horses, cows and sheep can be effectively distinguished from each other and from vegetation using their unique spectral signatures, even with relatively coarse spatial resolutions of 2 meters. In a small proof-of-concept study to assess the technology, pixels could be effectively categorised with 90% accuracy overall.

Imagery for manual counting of populations is now at a point where the resolution is good enough to find medium-large animals. Manual processing is still time consuming and labour intensive though. Unfortunately, automated and semi-automated detection techniques for identifying and counting individual animals are not yet at a stage where they can be used reliably over large scales and/or outside of homogenous environments due to the high false positive rates. But that doesn’t mean there aren’t any uses for these techniques right now. Identifying large population fluctuations (e.g. 1000’s), detecting the presence of animals in remote locations or, in some cases, augmenting traditional population surveys for small or homogenous areas are all possible with current technology.

Interdisciplinary collaborations will be as valuable in the future as they have been to date. Taking advantage of technology being developed in biomedical science and engineering will prevent ecologists having to reinvent the wheel in image analysis. The combination of remote sensing and image analysis technology has the potential to change how traditional population surveys are done for a wide range of conservation and agricultural applications.

These types of alternative technologies are likely to become increasingly important tool for ecologists and conservationists as limited funding is spread over more and more species. The breadth of methods, and species they are applied to, is increasing and we’re starting to use them in more challenging environments. In the future, remote sensing technology and image processing software will undoubtedly add a new dimension to ecological research and animal population surveys – exciting times await!

To find out more, read our Methods in Ecology and Evolution article ‘How do you find the green sheep? A critical review of the use of remotely sensed imagery to detect and count animals’.

1 thought on “Remote Sensing for Counting Animals: Polar Bears, Sheep and Everything In-Between”