The British Ecological Society Annual Meeting is fast approaching. Those of you joining us in Birmingham will have a chance to meet our Senior Editors. So, we thought that you might like to get to know them a little bit beforehand.

What can you tell us about the first paper you published? 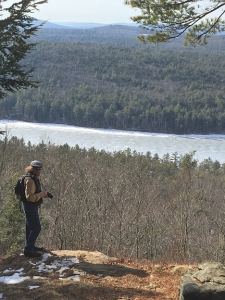 I published my first paper in 1983 (A naturally occurring developmental synergism between the cellular slime mold, Dictyostelium mucoroides and the fungus, Mucor hiemalis). It was based on summer undergraduate research in which I developed a new method to collect cellular slime molds (Dictyostelium spp.) in the field and then worked on culturing them in the lab during the following fall and spring. During this time, I discovered that one of the strains of D. mucoroides only made stalked fruiting bodies in the presence of a fungus, Mucor hiemalis. My first draft was terrible, but I learned a lot through the editing process with my undergraduate mentor, Leo Buss.

What’s your favourite species and why?
I’ve worked on taxa from most every kingdom, from the equator to temperate and boreal forests and alpine treelines, and in terrestrial, freshwater, and marine habitats. But if I had to choose one, it’d be Haliclona implexiformis. It’s a relatively common demosponge in shallow tropical waters, where it grows on coral reefs and on mangrove roots. It’s quite a nice shade of purple, and like most sponges, it has a great lifestyle – it just sits and filter-feeds. I’ve often thought if I had to do my career all over again (or have yet another career), I’d be a sponge taxonomist. And if I could be reincarnated, I’d come back as a sponge.

What’s your favourite sports team and why?
I don’t have a favourite team, but I love baseball for the game itself. Whenever I go to a spring, summer, or fall meeting in the US, I always try to take time to attend a minor-league game.

Who inspired you most as a student?
My undergraduate science mentor, Leo Buss. Although I wasn’t a science major, he was very welcoming to me and the other undergraduates in his lab and took a lot of time to help us develop as young scientists. He also provided useful advice when asked. I had the pleasure and privilege of returning to his lab as a “Distinguished Visiting Professor” 36 years after I received my undergraduate degree, and in the same year that he retired from Yale.

What was the first album you owned?
Simon & Garfunkel’s Parsley, Sage, Rosemary and Thyme (1966).

If you could wake up tomorrow with a new skill, what would it be?
I’d like to know how to do metalwork or stonework. It would be a good complement to my admittedly amateur woodworking skills.

Please share a [funny] story about a paper you had rejected.
A paper I published back in 2006 in PLoS Biology was (of course) rejected without review by Science and Nature. But when it was published, it was that week’s “editor’s pick” in Science and got a three-page illustrated spread in the “news & views” section of Nature. I’ve often thought of turning that experience into a journal I’d like to start, called DRoSS (Dregs of Science). Any paper submitted to DROSS accompanied by three rejection letters—preferably from Nature, Science, PNAS, or Cell—would be automatically accepted. Online only, of course, and neither formatting requirements nor publication fees. Contact me if you’d like to join the editorial board!

Are you a good cook? What’s your signature dish?
Some say I am. Just about anything with wild mushrooms.

If any fictional character could join your lab, who would it be and why?
Zippy the Pinhead. If you need to ask why, you’d never understand.

If you could recommend one place for people to travel to on holiday, where would it be and why?
Valparaiso, Chile. Beautiful location, great food, wonderful people, and fantastic funiculars.

Are you attending #BES2018? If so, when is the best opportunity for people to meet you?
Yes, it’ll be my first BES Annual Meeting. During the day I’ll mostly be at the BES stand. I’ll also be taking part in the Speed Review Session on Monday evening – sign up at the BES stand if you’d like my opinion on your manuscript!

At work, Aaron is an ecologist, statistician, mathematician, and programmer; at play, he’s a writer, photographer, woodworker, and occasional sculptor. Both focus on the disintegration and reassembly of ecosystems following natural and anthropogenic disturbances, the relationship between the Dao and the Intermediate Disturbance Hypothesis, the critical and reactionary stance of Ecology relative to Modernism, and creative software-engineering solutions for reproducibility of research. He does field work around the world on forests, carnivorous plants, and ants; statistical work mostly on spatial analysis; and software development focused on generating and using provenance for R and Python scripts.