Champagne Tastes on a Beer Budget

Freshly outfitted with a VACAMS camera and GPS unit, #1691 heads off into the forest with her calf. ©Carlos A. de la Rosa

There’s a frustrating yin and yang to biological research: motivated by curiosity and imagination, we often find ourselves instead defined by limitations. Some of these are fundamental human conditions. The spectrum of light detectable by human eyes, for example, means we can never see a flower the way a bee sees it. Others limitations, like funding and time, are realities of modern-day social and economic systems.

Early career researchers (ECRs) starting new projects and delving into new research systems must be especially creative to overcome the odds. Large grants can be transformative, giving a research group the equipment and resources to complete a study, but they’re tough to get. Inexperienced ECRs are at a disadvantage when competing against battle-hardened investigators with years of grant writing experience. Small grants of up to about $5000 USD, on the other hand, are comparatively easy to find. So, how can ECRs make the most of small, intermittent sources of funding?

I found myself faced with this question in the second year of my PhD field work.

Superheroes and Supervillains of the Tropical Deciduous Forest

In the summer of 2015, I was working in the tropical deciduous forest east of Pueblo Álamos, Mexico. After a preliminary visit the year before with my PhD advisers, Patty Gowaty and Steve Hubbell, I was fascinated by the forest and the people who lived there. Like many other ECRs, I was curiosity rich, but resource poor.

The forests of the Sierra Madre foothills are a riotous, unsubtle mash-up of two seemingly incongruous ecosystems: the Sonoran desert and the neotropics. The vegetation is bimodal, almost completely bare of leaves during the arid winter, but vividly green and lush during the summer monsoon season. The flora and fauna are awkwardly jammed together, like the ecological version of a superhero crossover movie: Stenocereus cacti touch shoulders with towering kapok trees, boa constrictors cross paths with western diamondback rattlesnakes, turkey vultures wheel on thermals above shrieking flocks of military macaws.

As in much of Latin America, cattle ranching in the Sierra Madre foothills of Mexico is culturally and financially a way of life. In many tropical areas, livestock pastureland is created by deforestation and cultivation of pasture grasses. This practice has made cattle a top contender for worst environmental supervillain to many conservation organizations. In the Álamos region, though, wholesale deforestation for cattle pasture is against the law. Because of this, cattle ranches generally consist of a patchwork of primary and secondary tropical dry forest and small, managed grasslands. Cattle pick their way carefully through a diverse forest ecosystem, feeding on a wide variety of annual and perennial plants.

I had spent six months the previous summer identifying trees, shrubs, lianas, and cacti, measuring thousands of stems in plots paired across fences dividing active cattle ranches from protected land. By controlling for factors such as forest age, slope, and aspect, I hoped to isolate the effect of cattle on tree species diversity and distribution in the forest.

As I expected, certain species were less abundant in ranched areas, while others were more common. But why was this? Was it trampling, soil compaction, extra nitrogen from waste, or the physical trauma of browsing? What effect, if any, did cattle browsing have on tree mortality? And, faced with a diverse foraging landscape, how were cows choosing what woody plants to eat?

A Different Point of View

Wary of humans, cows were challenging to observe in the forest. ©Carlos A. de la Rosa

Most people at some point in their lives have dreamed of seeing the world through the eyes of some animal or another, soaring over the Grand Canyon with the eyes of a red-tailed hawk, or watching the waves of the Pacific flash past through the eyes of a bottlenose dolphin. Perhaps fewer have wondered what a typical day looks like through the eyes of a cow, but this is exactly what I wanted to do. As my study species were wary of humans and had a habit of disappearing into the trees, weaving their way along dark paths like the forest elephants of Gabon, attaching cameras to them seemed the best way to find out what they were eating.

Animal-mounted cameras, lenses pointed at the lower jaw just inches from the plants being eaten, were an odd but natural choice for my study. I was happy to discover that researchers had already paved a technological path forward. National Geographic’s “Crittercams” have informed a wide range of foraging and behavioural studies since the mid-1980s. More recently, Lotek Wireless developed a wildlife camera-collar system that works with a range of Lotek tracking systems. The modularity, quality control, and customer service of a purpose-built product like the Lotek camera collar makes it an attractive tool for wildlife research. Unfortunately, these features come at a cost, and are financially out of reach for many ECRs like myself. For the study I had designed, I needed more data (and thus more units) than I could afford with my grants and stipend.

I considered another option: going it alone and building a data collection system from the processor up, as Beringer, Millspaugh, Sartwell, and Woeck ambitiously did in their 2004 study of captive white-tailed deer feeding behavior in Wildlife Society Bulletin. This approach can be inexpensive. A homemade motion-sensor wildlife camera based on the Raspberry Pi computer, for example, would cost somewhere around $100-200 USD. An animal-mounted time-lapse system like I needed presented a daunting learning curve, though. I was worried about wasting too much time and data in the trial and error phase. 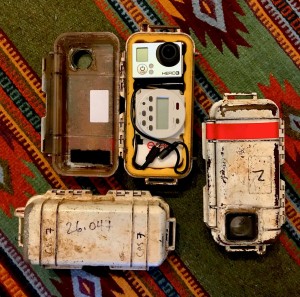 VACAMS units. A Cam-Do scheduler/timer, with custom scripts, automates the GoPro HERO3 Black. Internals are encased in a waterproof shell.

With VACAMS (Video And Coordinate Animal-Mounted System), my camera and GPS data collector, I tried to find a middle ground, cobbling together commercially available consumer products into a useful scientific tool. The GoPro camera, external battery, and Cam-Do scheduler were easy to find and relatively inexpensive.

At the time of my study, the GoPro HERO3 Black was no longer the latest model, but their popularity meant that dozens were available at a steep discount on eBay. Designed for action sports, the cameras were able to record video at a high enough quality that I knew I could identify plants from the clips. For the GPS units, I was inspired by Blake Allen et al.’s excellent 2013 paper A cost effective and informative method of GPS tracking wildlife. The i-gotU GT120 data logger, also developed for outdoor sports, was very inexpensive and easy to use.

Neither the camera nor data logger was originally intended to collect data for scientific analysis. Both required modifications to extend battery life, waterproofing, ruggedizing, and automation on a data collection schedule. Compared to building my own camera, though, the coding and soldering were relatively minor, and the overall learning curve was significantly less steep.

There are downsides to making your own scientific equipment, though. Any new system requires a period of testing and quality control, to find weak points and work out the bugs. In my case, a lapse in judgement nearly sank my first field season almost before it began. I affixed my first two cameras to cows with cheap hardware-store cable ties, not knowing how hard the cows would be on the units. Within 24 hours, both had broken off of the collars, falling off in the forest. As I hadn’t yet invested in a VHF tracking system, I lost both units (although a local ranch hand rediscovered one, a full year later)!

I also lost a month of work and data as I researched and purchased telemetry equipment, waited for shipping, and eventually drove back to the United States to pick up tracking equipment for my remaining VACAMS units. Luckily, I still had a few months left to record data, and was able to pull together VACAMS version 2 in time to salvage my field season.

Technological frontiers are moving every day. In research utopia, the best tools would be within reach of anyone with an interesting, testable idea. In reality, scarcity makes the research funding landscape uneven. Not all worthy projects can be adequately funded, so the methods we choose to test our hypotheses are often more a product of what we can afford, rather than the best available option. Co-opting technology and ideas from recreational industries (or from other scientific disciplines) can result in rapid, exciting advances, and make quality data attainable to researchers on a budget.

Luckily, I and other ECRs live in a time when a supportive community of like-minded hackers is only a click away. Thousands of tutorials and millions of lines of code are freely available and open-source, discoverable on the web. At times it was nerve-wracking, but in the end, my PhD project would not have been possible without a bespoke data collection system. By sharing my experiences, I hope to contribute in a small way back to this community.

To find out more about VACAMS, read my Methods in Ecology and Evolution article ‘An inexpensive and open‐source method to study large terrestrial animal diet and behavior using time‐lapse video and GPS’

3 thoughts on “Field Work on a Shoestring: Using Consumer Technology as an Early Career Researcher”