The February issue of Methods is now online! 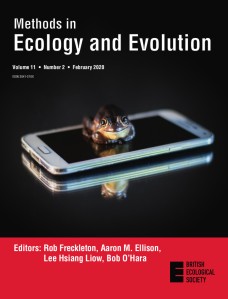 The latest issue of Methods in Ecology and Evolution is now online!

Executive Editor Rob Freckleton has selected six Featured Articles this month. You can find out about all of them below. We’ve also got six Applications articles and five Open Access articles in the February issue – we’ll talk about all of those here too.

On top of all that, the February issue includes articles on population genetics, ecological assemblages, and reconstruction of protein sequences.

Thinking Like a Naturalist: Accurately identifying species in images submitted by citizen scientists is a bit of a bottleneck for many data uses. Terry et al. examine the automated identification of ladybird records from the British Isles submitted to the UK Ladybird Survey. They show that machine learning models can effectively harness contextual information to improve the interpretation of images.

Stable Isotopes and Invasion Ecology: McCue et al. review and discuss how stable isotope analysis can complement fundamental research themes in the study of biological invasions. In particular, they look at how these methods can be used to help answer questions relating to the physiological and ecological mechanisms underlying invasion processes and invader impacts. They highlight several paths forward and describe how unresolved challenges in quantifying the rates, impacts, and mechanisms underlying invasions could potentially benefit from the use of stable isotope analysis.

Camera Transects for Nocturnal Flying Isects: Ruczyński et al. have developed, tested and implemented a non‐invasive unbiased method with camera transects to measure spatio‐temporal fluctuations in the abundance of nocturnal flying insects in different habitats. Their results show that the method is useful for the temporal and spatial comparison of insect abundances. In the article, they emphasise the importance of quantifying the dynamics of flying insects at a high spatio‐temporal resolution.

LeafByte: Quantification of herbivory on foliage is a key metric in characterising plant–herbivore interactions. But current methods are slow or inaccurate. LeafByte is a free iOS application that can save data automatically, read and record barcodes, handle both light and dark coloured plant tissue, and be used non‐destructively.

FrogPhone: Auditory surveys are instrumental for a range of absent–present studies of vocal species. But, they’re generally time and resource‐intensive. To keep the cost of time and travel associated with auditory surveys at a minimum, Garrido Sanchis et al. have developed a device, the FrogPhone, for remote monitoring. It allows researchers to extend auditory survey projects while decreasing overall project costs.

MGDrivE: MGDrivE (Mosquito Gene Drive Explorer) is a simulation framework designed to investigate the population dynamics of a variety of gene drive architectures and their spread through spatially explicit mosquito populations. It contains a genetic inheritance module, a population dynamic module and a landscape module.

We’ve got six applications articles in this month’s issue of Methods in Ecology and Evolution – three of which have been covered above (LeafByte, FrogPhone and MGDrivE). Let’s find out about the other three:

CamoGAN: CamoGAN is a novel method to exploit Generative Adversarial Networks to simulate an evolutionary arms race between the camouflage of a synthetic prey and its predator. It will be highly useful, particularly for biologists, for rapidly developing and testing optimal camouflage or signalling patterns in multiple environments.

poplar: Population dynamics play a central role in the historical and current development of fundamental and applied ecological science. But the challenges of identifying relevant datasets, the heterogeneity of available data and access to raw (as opposed to aggregated or derived) observations make synthesis of population data difficult. To overcome these issues, Compagnoni et al. have built a relational database, popler.

We’ve been getting ahead of ourselves with this month’s Open Access articles – just like we did for the Applications articles. You’ve already read about three of the five OA papers in our February issue (MGDrivE, CamoGAN, and Thinking Like a Naturalist). We’ve got another two fantastic papers that are free for anyone to access though: 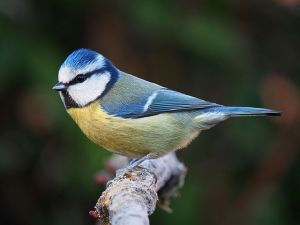 Predicting Species Interactions: Ecologists have long suspected that species are more likely to interact if their traits match in a particular way. Pichler et al. show that ambiguity among empirical trait‐matching studies may have arisen at least in parts from using overly simple statistical models. They found that the best machine learning models can successfully predict species interactions in plant–pollinator networks, outperforming conventional generalised linear models by a substantial margin.

The Frog on the Cover 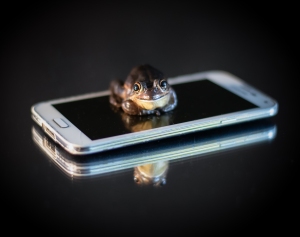 This month’s cover image shows a simple representation of the FrogPhone: a novel device which allows scientists to call up a frog survey site and monitor them in the wild. The FrogPhone is the world’s first solar‐powered remote survey device that relays environmental data to the observer via text messages, whilst conducting real‐time remote acoustic surveys over the phone.

In ‘The FrogPhone: A novel device for real‐time frog call monitoring‘, Garrido Sanchis et al. present the device in full detail. The frogphone utilises 3G/4G cellular mobile data coverage and capitalises on the characteristic wideband audio of mobile phones, which acts as a carrier for frog calls. Real time frog calls can be transmitted across the 3G/4G network infrastructure, directly to the user’s phone. This supports clear sound quality and minimal background noise, allowing users to identify the calls of different frog species.