As many of you will already know, Dr Vamosi is the newest (and first female) Senior Editor for Methods in Ecology and Evolution. She joined Rob Freckleton and Bob O’Hara in June of 2014 and has been working on manuscripts ever since. Jana is also organising the Canadian half of our 5th Anniversary Symposium in April (the Early Bird deadline for which is approaching – Friday 20 March). We are also running a Poster Session at this event; if you would be interested in submitting a poster, please contact Jana here.

The research in Jana’s lab focuses on the macroevolution, macroecology, community ecology, and conservation biology of plants. Many of their projects require gathering empirical data on the mechanistic underpinnings of plant diversity in specific locales. However, they often incorporate global phylogenetic perspectives as well. You can learn more about the lab’s work here.

Jana’s most recent publications include ‘Species and Phylogenetic Heterogeneity in Visitation Affects Reproductive Success in an Island System’ (along with Lorraine Adderley) which was published in International Journal of Plant Sciences in February and ‘Evolutionary ecology of specialization: insights from phylogenetic analysis’ (along with W Scott Armbruster and Susanne S Renner) first published in October 2014.

As part of our International Women’s Day activities, we wanted to have a short profile on Jana. Luckily, she had recently written one for the 6th International Barcode of Life Conference which will be taking place at the University of Guelph from 18 August to 21 August 2015. Jana will be giving a Plenary session (along with Charles Godfrey and Naomi Pierce) on Ecological Interactions.

The following was originally posted on the International Barcode of Life Conference here.

Number two in our series of guest posts written by the Plenary Speakers for the Sixth International Barcode of Life Conference.

I am a biodiversity scientist who is excited by the idea of functional diversity. Our understanding of the functional roles species play in ecosystems is slim and their importance is often underappreciated. I think Will Cornwell depicted it well in the figure below.

In endeavoring to make sense of the functional roles of plant species, my research encompasses aspects of macroevolution, macroecology, community ecology, and conservation biology of plants. Combining the ideas of functional diversity with data for which we have genetic data (e.g., barcode data) often leads me to incorporate phylogenetic approaches.

While I often keep a specific focus on the evolutionary ecology of plant-insect interactions, I’ve even extended this line of research to investigating the functional aspects of genome architecture in animals. 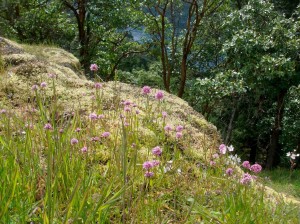 Researchers in my lab are currently involved in determining how speciation and extinction rates depend on past range expansion to locales where different pollinator guilds are predominant. We also investigate the role of plant trait diversity in determining stability and productivity of ecosystems.

Recently, my research on ecosystem function has taken a unique applied turn in investigating the important role plant biodiversity plays in sustainable agriculture. Understanding the role of species and their inherent traits in improving crop yields can go a long way to changing the public’s perception of the natural world from considering it a luxury to a necessity. To this end, I’ve teamed up with Mozilla Science to incorporate these ideas into video games.

The game in development is called Diversibee.  The game involves a farmer that has bought some acres of natural forested land that supports these species of bees. The farmer can deforest the land to plant a fruit crop and this will, at first, be a highly lucrative venture. But as more and more forest gets removed, the forest will cease to support the bee species necessary to pollinate the crop and the profit gained from the crop starts to diminish. The aim of the game is to find the optimal crop:forest configuration that maximizes the yield through maintaining healthy bee populations (and hence, profit to the farmer). How much forest should the farmer save? Should the farmer replant – if so, with which species? Should the traits of the forest be optimized for diversity to increase yield?

Though not a gamer myself, I’ve come to appreciate the value of play in teaching these concepts. Through increasing interest in functional aspects of species in a fun and engaging way, I hope to increase knowledge and appreciation on functional diversity.

If you are interested in seeing Jana’s plenary, and the other wonderful speakers at the 6th International Barcode of Life Conference, you can register here.