Finding a call of a particular primate species within hours and hours of audio recordings of a forest is no easy task; like finding a ‘needle in a haystack’ so to speak. Automated acoustic monitoring relies on the ability of researchers to easily locate and isolate acoustic signals produced by species of interest from all other sources of noise in the forest, i.e. the background noise. This can be much harder than it sounds. Think about whenever you have to use any kind of voice recognition system: seeking out a quiet room will greatly improve the chances you are understood by the robot-like voice on the other end of the phone. If you ever set foot in a rainforest the first thing you’ll notice is that it is anything but quiet. In fact characterizing and quantifying soundscapes has become a marker for the complexity of the biodiversity present in a given environment.

Primate monitoring programmes can learn a great deal from cetacean research where Passive Acoustic Monitoring (PAM) is the norm (since individuals are rarely observable visually). Research on bats and birds can provide excellent examples to follow as well. Automated algorithm approaches including machine learning techniques, spectral cross-correlation, Gaussian mixture models, and random forests have been used in these fields to be able to detect and classify audio recordings using a trained automated system. Such automated approaches are often investigated for a single species but impressive across-taxa efforts have also been initiated within a framework of real-time acoustic monitoring. Implementing these in other research fields could lead to significant advances.

We have been tackling the African tropical rainforest to try and capture the vocalizations produced by nonhuman primates, whose numbers in the wild are dwindling. More than half of all primate species are endangered, including our closest living relative, the chimpanzee. Working in the Taï National Park, Côte d’Ivoire (with the Wild Chimpanzee Foundation), where there are 8 diurnal species of primates all inhabiting one of the last continuous stretches of primary forest in the country, we aimed to investigate whether PAM could be applied for primates as well as it has been for other taxa.

The first step: make lots of recordings of the forest, the second step: find a way to automatically detect the calls of the species in the recordings. We used 20 Autonomous Recording Units (ARUs) (we used the Songmeter SM2+ but other products are available) in 45km2 of primary forest, covering an area that included the territories of two chimpanzee groups of the Taï Chimpanzee Project and many monkey groups. This required creating a library of annotated sounds of interest that could be used to develop and train an automated system. It was vital that we tested the accuracy of our method using an independent dataset. Often this is not the case when automated systems are published in the literature, thus making it difficult to assess the true power of the system. We sincerely hope this becomes standard practice in our field.

Shogun, an adult male chimpanzee producing a long distance pant-hoot vocalization and preparing to drum on the buttress roots of this tree. ©Liran Samuni

Teaming up with the Fraunhofer Institute for Digital Media Technologies, we developed an algorithm constituting three main components: source separation (where chimpanzee sounds are separated from the original recordings to specifically improve detection of these low frequency calls), feature extraction and classification (where the best features – from over 150 options – are chosen for classifying each signal by an algorithm), and signal detection via segmentation (by analyzing the amplitude patterns of adjacent frames of only a few milliseconds of the recordings,the borders, or starts and stops, of a single sound of interest are identified). These processes work in parallel but the system had varying levels of success for the five different primate calls we had targeted. The loud calls of two monkey species worked best, the Diana monkey (Cercopithecus diana diana) and the black and white or king colobus (Colobus polykomos). The repetitive, long duration and highly stereotyped nature of these vocalizations proved to be well suited to an automated detection and classification system from background forest recordings. Calls that were highly variable in their sound and short in duration, such as the red colobus contact call, were not identified with the same level of accuracy. 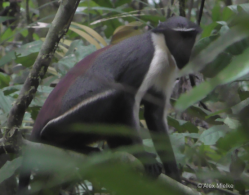 Who has the time? Wild primates don’t!

Despite our final recommendation being that one should have some degree of validation/checks to ensure automated results are useful, one of the key benefits of our semi-automated approach is the reduced time investment of time that is needed. We were able to show that using the automated approach saves 96.5% in time compared to listening to recordings manually, even with our system where 50%-93% of calls needed to be checked (see Table 2 & Fig.3 in our article) .

The greatest benefit of automated approaches comes in its ability to save time and provide the data of interest more quickly to researchers on the ground, so that real-time monitoring of species becomes a real-time possibility! This is paramount in primatology, where we struggle to find ways to protect the last healthy, wild populations of monkeys and apes. Most wild primates are highly cryptic and scared of humans in most parts of their natural range due to the devastating effects of hunting and habitat loss. Automated monitoring systems give us the opportunity to gain a much greater understanding of these animals.

Romario, a subadult male, balances and listens after drumming on the roots of this large tree. ©Ammie Kalan

In our second, follow-up study we were able to use our semi-automated approach to estimate the probability of occurrence of the three primate species for our study area and compared this to data collected by human surveyors along point transects in the same area. We demonstrated that occupancy probabilities derived from PAM were reliable and, in the case of the chimpanzees, even more accurate. This is because a single ARU in the forest can record continuously for a long period of time without moving, meaning that the chances of failing to detect an animal if it is truly there is diminished over time. For species with a large range, such as chimpanzees whose ranges are 10-30km2 in forests, this is particularly beneficial .

The Power of PAM: A tool for conservation and research

Coupled with the semi-automated algorithm for detecting and classifying calls, PAM has the ability to provide field researchers on the ground with real-time, continuously updated (eg. on a monthly basis) occurrence probability estimates and call detection rates. Any changes at any particular sampling location or ARU, could alert practitioners to investigate on the ground and guide patrolling and protection efforts. This would lead to a better investment of the limited resources often available to conservation organizations in these remote rainforest locations, and to a more evidence-based approach for biomonitoring and conservation efforts.

There are still many avenues left to explore when it comes to PAM for primates. Inherently, the data PAM produces is spatially explicit, therefore monitoring vocalization rates captured on ARUs can illuminate spatial-temporal patterns in calling activity at each location. Movement patterns, ranging, habitat use and seasonal activity, are just some of the research topics that spring to mind when considering the use of spatially explicit PAM data. For a large ranging, territorial species like the chimpanzee, PAM provides a unique chance to monitor all parts of the territory at once for occurrences of the animal. This would allow researchers to investigate questions that are not always so easy to look at with data using focal follows of single individuals. 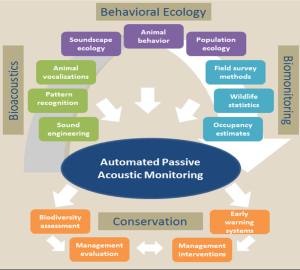 A summary of the various disciplines and expertise needed to develop automated PAM systems that can be used for applied conservation efforts in the field. ©Ammie Kalan

Currently, the spatio-temporal patterns look interesting and we are in the process of validating whether passive acoustic data actually reflects chimpanzee ranging behaviour and activity on the ground.  Stay tuned for more information on this. Until then we hope that we have encouraged you to go out and explore the potential PAM can hold for management and research for your species of interest.

If we are to make real advancements in this field, it will depend on biologists collaborating more closely with sound engineers and acoustic industry specialists so that we might truly use bioacoustics to help protect and manage wildlife. We hope interdisciplinary collaborations will become more and more sought after and funded until they become the standard for moving automated biomonitoring forward.

To find out more about Passive Acoustic Monitoring, read ‘Assessing the performance of a semi-automated acoustic monitoring system for primates‘ by Stefanie Heinicke et al. This paper is part of our Wildlife Monitoring Virtual Issue.

4 thoughts on “Progress and Future Directions for Passive Acoustic Monitoring: Listening Out for New Conservation Opportunities”