Women in academia are special. This isn’t because of their abundance and diversity (or lack of it in some circles) but rather because of the challenges faced by women. As an early career woman researcher, I have had the privilege of knowing and learning from some incredibly inspirational women scientists. In this post – peppered with the lyrics of Joan Baez – we will meet three of these exceptional scientists working in three different realms (terrestrial, estuarine and marine). I hope that their strengths will be as inspirational to others – as they have been to me – and that in the years to come, we, as women, shall overcome the glass cliffs and glass ceilings of academia.

In the terrestrial realm of tropical forests, researchers often have to work with government officials (for instance, the forest department). Challenges of gender equality can be particularly stark in these workplaces. A key challenge for women in such a setting is not being considered a professional. Female researchers are far too often underestimated: lecturers assumed to be trainees, post-doctoral researchers mistaken for students.

Dr Ankila Hiremath, who has been working in forests in India for over two decades, states: “I have experienced, on more than one occasion, visits to officials accompanied by other (male colleagues) where the officer has addressed my male colleagues as professionals and then turned to me with a “What are you studying?” or worse yet, “What does your father do?” Such questions are rarely, if ever, targeted at men. The patriarchal mind set makes it harder for women field biologists to build professional connections and relationships over time.

Those who survive are uniquely adapted. “Growing more grey hair” undoubtedly helps, as Ankila has realized over the years. It is tough to change perceptions in a day, but I hope that with the growth of the heforshe movement, one day we (men and women) will be able to walk hand-in-hand as equals.

We Shall Live in Peace, Some Day #Conflict

In the estuarine realm, there is little doubt that nature of people is “red in tooth and claw”. Mangrove warrior (and acclaimed scientist), Dr Jurgenne Honculada–Primavera has faced several such conflicts over the past four decades. She is one of the few passionate mangrove biologists who has lived to tell the tale of being escorted by armed guards as a “professional hazard” of being a biologist.

Mangroves in South-East Asia, particularly in the Philippines where Jurgenne works, are under severe threat from the aquaculture industry, among others. This is true even in areas where mangroves are protected under the law. In one of these areas, Jurgenne had reported the illegal felling of the protected mangrove patch to the local environment office. A multi-sectoral group was sent to investigate onsite and this enraged the accused. Subsequently she received threats to her and her assistant’s life. Her assistant quit the project. Jurgenne managed to ameliorate the situation with her diplomatic and negotiation skills, but the research on that site had to be abandoned.

Over the years, as a Pew fellow in marine conservation (2005-2010), Jurgenne has strived hard to conserve mangroves through capacity building and improved governance. She is an inspiration for scores of young minds both in her country and beyond. Standing up and speaking out – whether it’s about illegal work in protected areas or unequal opportunities in a lab – can be intimidating. Hopefully there are enough of us nature lovers out there with the strength to follow Jurgenne’s example, so that we can live and work in peace and equality, some day.

We Shall All Be Free, Some Day #Dreams

From mangroves, we turn our attention to the vast open oceans – a habitat that marine turtle biologist Dr Annette Broderick has embraced with open arms for over 30 years. Annette’s research has led to the protection of three areas on Ascension Island, a key nesting area for marine turtles. 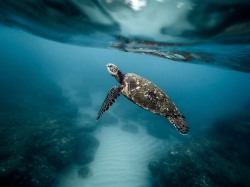 As a mother, a field biologist with regular annual field visits, and an associate professor, she has to fulfil several roles at once (and she does it in style). In my first meeting with her*, Dr Broderick came across as someone who had a razor sharp eye for detail, was a balancing point for the team in the room and had excellent organisational skills. Like many female scientists, she has had to balance work and family and deal with the perceptions of those choices.

In her own words: “When I was first appointed to Lecturer I had always worked part-time, having small children, but the advertised position was full-time and I was told to apply for the post and then later negotiate a part-time contract. So around a year later, I enquired about going part-time and was advised by senior colleagues that this might suggest that my family was more important that my career. For me this was a critical point, when I felt that by opting to go part-time I was making a potentially bad career choice. But my family were, and are, much more important to me than my career – and the good thing is that now, some 10 years later, that is OK. It is so much more acceptable to be part-time, ask for flexible hours to accommodate child care duties or just spend time with your family.”

Her formative years were strongly influenced by her grandmother and mother (both professionals). They had encouraged her to pursue her dreams and to be ambitious. I wish her more strength and hope that in the days to come, more women can be free to pursue their dreams like Annette.

How to Overcome Someday?

Overcoming the glass ceilings and the glass cliffs can be challenging. Changing ingrained behaviours takes time. Here are some suggestions that might be useful:

Bios of the Scientists:

Dr Ankila Hiremath is currently working in the Banni (a semi-arid grassland region in Kutch) where introduced Prosopis juliflora has taken over a large part of the landscape, changing it into a Prosopis woodland. This is affecting pastoralists’ livelihoods and spawning a new, charcoal-based economy. Ankila and her colleagues are looking at the impacts of Prosopis, and asking whether its removal and restoration is feasible – both ecologically and socio-economically – in this unique ecosystem.

Dr Jurgenne Honculada–Primavera is a Philippine-based Zoologist and Chief Mangrove Scientific Adviser of the Zoological Society of London. She was honoured by Time Magazine as a Hero of the Environment in 2008 and by Stockholm University with a 2004 Ph.D. Science Honoris Causa. Jurgenne has worked on mangrove conservation for more than three decades.

Dr Annette Broderick is an Associate Professor of Marine Conservation at the Centre for Ecology and Conservation at the University of Exeter. Annette studies marine turtles and also leads a long-term field study of the marine turtle populations in Cyprus.  Her work has focused on impacts of climate change, tracking turtles with satellites and much more.

*Conflict of interest: Annette Broderick is the current supervisor of the author.