How do we know how many fish there are in the ocean? 1000, 1 billion, 1000 billion? We can’t catch them all and count – that’s not practical. Nor can we make observations from Earth-orbiting satellites – light does not penetrate far into the ocean. What we can use is sound.

Sound travels well in water (faster and further than it does in air), so we can use scientific SONAR (echosounders) to produce sound waves and record backscatter from organisms and communities. This provides information concerning their biomass, distribution and behaviour. A recent study used echoes from the mesopelagic zone (200 – 1,000m) to predict global mesopelagic fish biomass to be between 11 and 15 billion tonnes (that’s a lot), suggesting that mesopelagic fish communities could potentially provide global food security.

In a recent paper, we (the Pelagic Ecology Research Group, PERG at the University of St Andrews) divided the global ocean up into regions based on the properties of echoes from the mesopelagic zone (see below).

Persistent echoes over discrete depth ranges, known as deep scattering layers (DSL), were first observed during WWII when US naval submarines picked them up on their SONAR.

The question is, what’s really inside these layers? Is it all fish amongst a background of weakly scattering zooplankton (weak because their bodies are of a similar density to that of the water, unlike fish that have gas-filled swimbladders)? Maybe, but no one knows for certain. Most of the echo intensity could be, for example, produced by gelatinous siphonophores predominantly from their gas-filled floats.

But before we get into that, we need a standardised method of identifying these layers in the data and summarising them.

We developed a method to extract layers from echosounder data in 2015, however, we did not provide the code to perform the extraction and so uptake by the community has been minimal. The code is now online though, along with an example, and we’re also in the process of making all our data and code available for public consumption.

Acoustic data processing is an arduous task. There’s a lot of it – lots of noise in many forms. Also, there aren’t many standard protocols; it can be quite subjective; and, most of the time, you need proprietary software. These are some of the reasons why active (as opposed to passive) acoustic data aren’t more mainstream and why we don’t see them sitting alongside temperature and salinity in oceanic databases… Now back to siphonophores.

Siphonophores are colonies of individuals called persons (yes, that is correct). Each person has a role (e.g. defence, swimming etc.), but we’re not interested in any of that. We are interested in the tiny 1-4mm float that controls their buoyancy. This, like a fish swimbladder, reflects sound and produces relatively large echoes. What makes them of great interest is that due to their size, the frequency commonly used to make observations of DSLs (38kHz), and their daytime depth (between 200 and 1000m) they can produce resonant backscatter much stronger than the echoes typically produced at other frequency-depth-size combinations.

Now you would think that we would have a handle on one of the most interesting and potentially strongest scatterers in the mesopelagic zone (see Barham, 1963), but we don’t. Why? Because they’re fragile and gelatinous and get mashed up by fishing nets, so direct observations are few and far between. They mainly exist in the form of videos like the one below by ROVs (remotely operated vehicles) at depth or SCUBA at the surface. Fish are a bit easier to catch (but a lot escape – related to their size) and so naturally we point to them, when asked what is producing the majority of DSL backscatter. So what can we do about all this? As always GET MORE DATA, MORE INFORMATION… or try something different?

I was lucky enough to be involved in an expedition that circumnavigated the Antarctic continent (ACE) collecting acoustic data to feed into the Mesopelagic Southern Ocean Prey and Predators (MESOPP) project (well I was on the leg from Germany to South Africa and then on to Australia, at which point I hopped off, but our group continued on). On this expedition we used a lower frequency sounder (lower frequency: longer range at the cost of lower resolution), operating at 12 kHz. At 12 kHz, the wavelength is larger than at 38kHz, meaning the size of the organisms producing resonant backscatter increases for any given depth and so the swimbladders of fish (which tend to be larger than siphonophore floats) will be likely to produce a larger percentage of DSL backscatter. So, we’re going to use the layer method, extract the layers at the lower frequency, compare this to our database of layers from the Southern Ocean at higher frequencies and untangle the resonance of siphonophore floats and fish swimbladders – but so what?

If you don’t already know – these layers are important. They transport energy between the surface and the deep ocean. Some of that stuff is carbon that comes from our atmosphere and, yes, some of that ‘stuff’ comes from you. Insert paragraph on climate change here. If you’d still rather see DSLs fished, let me tell you, mesopelagic fish are not nice to eat. They’re bony and oily and will not make you look younger if you rub their photophores all over your face. They could possibly make you glow (lanternfish biolouminesce, produce light chemically) but I digress. 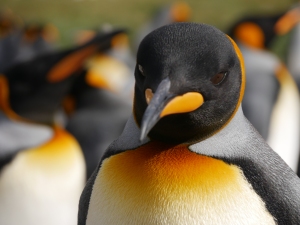 So not much point in a fishery? Well, if you could fish them sustainably then they could be useful for agriculture and aquaculture as feed. They’re also prey for marine mammals and birds though – King penguins, elephant seals and whales dive down and feed on these layers (it’s not looking good for mesopelagics either way) – so this might be difficult. If you would like to witness this, just go to your nearest ocean front, DSLs are shallowest there…

So, what should you be taking away from this? Firstly, if you publish a method, provide the code so that people can use it.

More to the point though, acoustics is hard to get into, but holds invaluable information concerning the middle portion of oceanic biomass pyramids (for more information contact your local research vessels acoustician, most will have hull-mounted echosounders, you just need to attach a hard drive and press go – more or less). Deep scattering layers which may comprise a huge biomass of fish are important as both an ecosystem service and perhaps a potential fishery – but maybe it’s all just a gelatinous soup of siphonophores. We need to continue to improve our acoustic methods to really figure it out. Either way, bon appetite!

To find out more read our Methods in Ecology and Evolution article ‘A method for identifying Sound Scattering Layers and extracting key characteristics’ (No Subscription Required).