Vector-borne viruses (like those transmitted by mosquitoes) are (re)emerging and they’re hurting local economies and public health. Some typical examples are the West Nile, Zika, dengue, chikungunya and yellow fever viruses. The eco-evolutionary and epidemiological histories of these viruses differ massively. But they share one important factor: their transmission potential is highly dependent on the underlying mosquito population dynamics.

An ultimate challenge in infectious disease control is to prevent the start of an outbreak or alter the course of an ongoing outbreak. To achieve this, understanding the ecological, demographic and epidemiological factors driving a pathogen’s transmission success is essential. Without this information, public health planning is immensely difficult. To get this information, dynamic mathematical models of pathogen transmission have been successfully applied since the mid-20th century (e.g. malaria and dengue).

These models are merely approximated, computational representations of the real biological systems. But they let us simulate a multitude of scenarios in our computers – testing, reconstructing and projecting a pathogen’s epidemic behaviour. When these simulations are compared to, or calibrated with, real world observations of a pathogen (e.g. reported number of infections by national health systems), we can learn a lot about what real world factors may have led to observed data patterns.

Dynamic models are key tools of contemporary epidemiology, but imperfect data often obscures our capacity to compare or calibrate simulations with real world observations. This affects our confidence in what we learn about the biological system. The roots of imperfect data are diverse, and can include regional differences in surveillance or medical resources, lack of political and public engagement, etc.

The Emergence of Suitability Indices 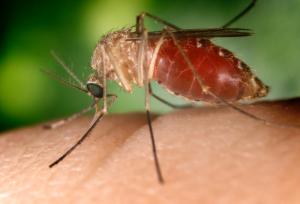 Culex mosquito on a human finger.

Because we don’t have optimal mosquito or epidemiological data, a new class of computational approaches termed suitability indices (e.g. Brady et al. 2014, Kraemer et al. 2019) are increasingly being used to estimate the transmission potential of mosquito-borne viruses. These rarely rely on the use of dynamic models, local entomological or epidemiological data. While methodological details vary between suitability indices, these can generally be seen as summary measure derived from a complex combination of numerous variables known to affect the biological system – e.g. temperature, rainfall, vegetation, urbanization, mosquito presence-absence reports, human or animal population sizes or densities.

The way and amount each variable affects pathogen transmission is a topic of much ongoing research. Significant interest and evidence has been put forward recently in relation to climate though. Variables such as temperature, humidity and rainfall have been consistently demonstrated to affect mosquito metabolic processes, triggering and syncing individual-level physical and behavioural changes. For example, temperature modulates several processes, such as aquatic-stage rates of development, adult life-span and the speed at which viruses disseminate in a mosquito’s body (i.e. incubation period).

In our recent Methods in Ecology and Evolution article, ‘MVSE: An R‐package that estimates a climate‐driven mosquito‐borne viral suitability index’, my collaborators and I introduce the index P. This is a new suitability summary statistic for the transmission potential of mosquito-borne pathogens. P is based on a climate-driven mathematical expression for the basic reproductive number (R0) of mosquito-borne viruses, in which parameters are informed by experimentally observed relationships between climatic variables and the metabolic or physical process represented by each parameter. To put it simply, P is the likely average number of new infections generated by a single infected adult female in a completely susceptible host population.

To make the index P accessible for research and education, we’ve developed an R-package called MVSE, the Mosquito-borne Viral Suitability Estimator. The package is equipped with all the functionalities necessary to estimate transmission potential using local humidity and temperature time series, as well as some prior knowledge on a few mosquito, pathogen and host parameters.

Application to the Dengue Virus

The dengue virus is a common mosquito-borne pathogen of (sub)tropical regions. It’s a classic example of a virus that mathematical models have been successfully applied to. But the entomological and epidemiological data we have for it is often patchy, not representative or incomplete.

Example of index P estimation for the city of Recife and its comparison to epidemiological data. To the right, a map of South America with mean yearly index P.

In the context of dengue, the index P can be used in many ways. For instance, having access to local, long-term time series of temperature and humidity allows you to reconstruct the climate-driven transmission potential of the virus. You can then verify how well this reconstructed transmission potential mimics the observed number of dengue infections. If a good match is reproduced (as shown in our example for Recife, in the center), we can draw some conclusions about the local epidemiology of dengue. For example, we were able to identify weather conditions that favour transmission in the city, as well as the times of the year when transmission is likely to be low or high.

The index P can also be projected into the future if you have robust data on climate projections. This is an avenue currently being researched by my collaborators and I, and one that wed love to see other interested researchers explore too.

To have the capacity to estimate transmission potential at the level of a city, village or neighbourhood is significant for local preparedness and control. But sometimes it’s better to have a wider view of transmission potential across large spatial scales. This can be useful for research, education and public health purposes, allowing us to identify spatial hotspots of transmission potential. With MVSE you can estimate this information really easily using geo-referenced climate data (e.g. satellite data). The South American map in the figure is an example for usage of satellite humidity and temperature data to estimate P at a spatial scale of approximately 18 by 18 kms. For those familiar with the topic, this top-down perspective clearly shows some expected patterns.; for example the high potential for epidemics in Colombia and Venezuela, and lower potential in Southern Brazil.

The examples in our article are based on South and Central America, but we hope that the research community will apply our method to other regions of importance. In particular, we’d like to see it used in regions where less is known about the seasonal potential of mosquito-borne viruses, such as Sub-Saharan Africa.

Can the Index P and MSVE be Applied to Other Host-Pathogen Systems?

Yes, there is potential to apply the index P to a wider variety of host-pathogen systems. This is because P’s formulation is not restricted to particular vector, host or pathogen species. For tick-borne pathogens, adequate mathematical relationships (between climate and metabolic processes of ticks) can be easily plugged-in. Similarly, for zoonotic pathogens including a non-human animal reservoir (e.g. West Nile virus), the index P can be estimated neglecting the human host by calibrating parameters for bird hosts and Culex mosquitoes instead. The index P can then be interpreted as a proxy for the potential of spill-over events to the human population.

Preliminary work on West Nile shows that the index P can indeed be informative for the transmission potential of pathogens beyond single-host or Aedes-borne systems – exemplified in these maps using satellite climate data from Italy and West Nile maps from the European Centre for Disease Prevention and Control surveillance Atlas (2018).

We hope that other researchers find the MVSE R-package useful and join us in expanding its application to a wider range of host-pathogen systems.

Uses for the index P and MVSE in Education

We focus our introduction and demonstration of the index P and MVSE in the context of their potential for research. But there are many reasons why they should be used in the classroom too. The interpretation of the index P should be easily accessible by most undergraduate and graduate students, since its formulation is based on R0 – a mandatory concept taught in virtually all epidemiology, public health and modelling courses.

MVSE is also implemented in R, a standard part of biology and public health teaching nowadays. The code required to estimate local index P time series (e.g. Recife, above), is short and intuitive. Finally, the index P can work as a pivot in critical, contemporary epidemiology, public health and one health topics, such as the importance of climate change for the future of infectious disease spread or the drivers of zoonotic spill-over.

To find out more about the index P and MVSE, read our Open Access Methods in Ecology and Evolution article ‘MVSE: An R‐package that estimates a climate‐driven mosquito‐borne viral suitability index’. (No Subscription Required)

3 thoughts on “Mosquitoes, Climate Change and Disease Transmission: How the Suitability Index P Can Help Improve Public Health and Contribute to Education”