The March issue of Methods is now online! 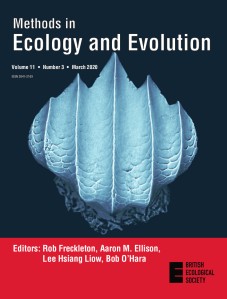 The latest issue of Methods in Ecology and Evolution is now online! This month’s issue is a little shorter than our last few. But, as they say, good things come in small packages!

Executive Editor Aaron Ellison has selected six Featured Articles this month. You can find out about all of them below. We’ve also got five Applications articles in the March issue that we’re going to cover.

On top of all that, the March issue includes articles on 3D modelling, estimating plant density and more.

Tracking Arthropods: Technological advances let us study the movement of arthropods in unprecedented detail. But we should adopt a more critical attitude towards the use of tracking devices on terrestrial arthropods. Batsleer et al. performed a systematic review of 173 papers about research in which tracking devices were attached to terrestrial arthropods. The impact of the tags was quantified in just 12% of the papers, while in 40% the potential impact was completely disregarded. Often‐cited rules of thumb for determining appropriate tag weight had either no empirical basis or were misconstrued.

Using Wavelet Filters for Birdsong Recognition: Acoustic recording units are widely used in field data collection. But the facilities to reliably process the data recorded aren’t well developed yet. Priyadarshani et al. propose a call detection method for continuous field recordings that can be trained quickly and easily on new species, and degrades gracefully with increased noise or distance from the microphone.

A Sustainable Approach to Structuring Samples: The best approach to analysing long‐term datasets depends on the structure of the data and questions of interest. It’s vital to account for confounding among‐cluster and batch variation though. The new slicing approach from van Lieshout et al. is simple to apply and creates the necessary statistical independence of batch and cluster from environmental or biological variables of interest. Crucially, it allows for sequential analysis of samples and flexible inclusion of current data in later analyses without completely confounding the analysis. This is an Open Access article.

polygene: Polyploidy (when it’s present) presents problems for genetic data analysis, which are caused by both genotypic ambiguities and double‐reduction. To address these problems, Huang et al. have developed a new software package: polygene. polygene enables the estimation of genotypic frequencies for a number of polysomic inheritance models. It enables easy and convenient allelic phenotype- or genotype-based analysis for both autopolyploids and diploids. This article is an Open Access Applications paper.

DBTree: Commonly used methods to reuse phylogenetic trees in scripting environments have their limitations. Rutger Vos presents a toolkit that transforms data presented in the most commonly used format for such trees into a database schema that facilitates quick topological queries. The database files that the toolkit produces are highly portable and can readily be queried. This article is an Open Access Applications paper.

We’ve got five applications articles in this month’s issue of Methods in Ecology and Evolution – two of which have been covered above (polygene and DBTree). Let’s find out about the other three:

Koe: Koe, an application for classifying and analysing animal vocalisations. It offers bulk‐labelling of units via interactive ordination plots and unit tables, as well as visualisation and playback, segmentation, measurement, and data filtering/exporting. The package contains new tools for analysing repertoire and sequence structure in an integrated environment.

Hmsc: Hmsc 3.0 includes several extensions over the previous version. It lets you ask how environmental conditions influence species‐to‐species association matrices, infer species‐to‐species associations from time‐series data of species‐rich communities, and to apply Hierarchical Modelling of Species Communities to large spatial data. It also offers much improved flexibility with respect to the random error structures, model fitting efficiency and greater functionality for post‐processing the results and for making predictions.

MOTMOT: Puttick et al. present the comprehensively updated R package MOTMOT (Models Of Trait Macroevolution On Trees) that contains methods to fit and test models of continuous trait evolution on phylogenies of extant and extinct species. It provides functions to investigate a range of evolutionary hypotheses, including flexible approaches to investigate heterogeneous rates and modes of evolution, models of trait change under interspecific competition and patterns of trait change across significant evolutionary transitions such as mass extinctions.

The ‘Shark Dandruff’ on the Cover 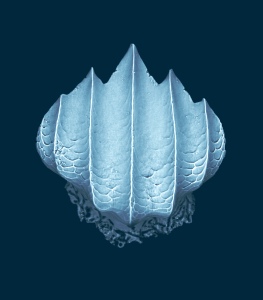 This month’s cover image shows the dermal denticle of a silky shark (Carcharhinus falciformis). Dermal denticles are the tiny, tooth‐like scales that cover the bodies of sharks and rays. This denticle is just under 300µm across – the width of a couple strands of hair. The false color image, captured using a scanning electron microscope, shows the honeycomb‐like microstructures and narrowly spaced ridges on the denticle’s crown that help reduce drag and enhance thrust as a shark swims through the water. Denticles are also shed, and they accumulate and are preserved in marine sediments over time. This process yields a time‐averaged denticle record that can span decades to millennia and beyond.